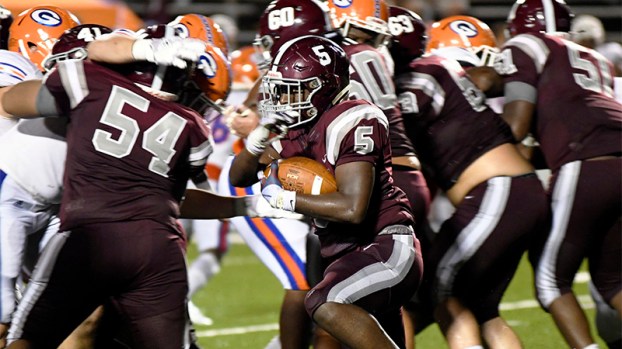 Change Of Pace: Running back Dorian Robinson searches for an opening at the line of scrimmage. Photo by Jonathan Mitchell.

The Mississippi High School Activities Association released school classifications for the 2021-23 school years with several schools moving up and down into new classes.

Every two years all schools that are members of the MHSAA are separated into specific classes depending on total enrollment from grades nine through twelve.

“Those regions are set by geography. We digitally do it. We look at the mileage and try to keep schools (together that require) the least amount of travel possible,” MHSAA Executive Director Don Hinton said.

As such, Poplarville will remain in 4A, while Picayune and PRC will stay in 5A.

However, there were a variety of schools that did change classes, majorly affecting who the three local teams will compete against in district matchups.

Picayune and PRC will remain in the same football district along with familiar foes East Central, Gautier and Long Beach.

However, joining the district for the first time in 2021 will be George County High School, Vancleave High School and West Harrison High School.

The Hornets will share the district with Forrest County Agricultural High School, Purvis High School and Sumrall High School, the same teams from the 2020 season.

New additions to the region include Columbia High School and Lawrence High School.

Regional opponents for county schools changed in other sports as well including basketball, soccer, volleyball, swimming and cross country.

Spring sports such as track and field, tennis, golf, softball and baseball will undergo reclassification at a later date.

Hinton said enrollment numbers have been down this year compared to when classifications were last done two years ago. He said COVID-19 hasn’t affected the classification process.

The MHSAA is waiting for winter enrollment numbers before starting work on those classifications.

“When you look at enrollment there have been noticeable differences in some schools because of transfers or (other factors). However, it’s worked smoothly (so far) and we’ll continue to finalize all that,” Hinton said.