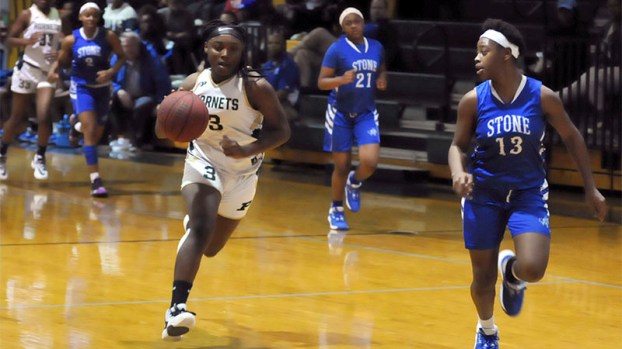 Back To Basics: The Poplarville Lady Hornets basketball team has been focusing on fundamentals in practice leading up to the first game of the season. File photo.

Poplarville’s Lady Hornet basketball team is making the most of this offseason as the team tries to secure a playoff spot this season.

Last year the Lady Hornets came within a game of earning a postseason opportunity when the team took on the Purvis Lady Tornadoes in the district tournament.

A win would’ve sent Poplarville into the playoffs, but Purvis ended up winning 49-40 to end the Lady Hornets’ season.

The team then moved into an offseason that was almost immediately disrupted by the COVID-19 pandemic.

Due to the ongoing pandemic, the team just recently started after school practices, and Head Coach Robin Jeffries said because of the lost time the squad is sticking to basics in practice.

“Conditioning is number one (right now) and then we just started implementing drills again. We have finally honed in on an offense and defense,” Jeffries said.

Getting the players in shape is of the utmost importance this year with the team not having a deep bench.

The lack of depth, along with the possibility of athletes missing games while quarantining because of COVID-19, means Jeffries needs all of her athletes to be in peak condition this season.

“We’ve got low numbers again. We just have to be in shape because the girls I do have need to be able to stay on the court,” Jeffries said.

Keeping fouls to a minimum this year will also be imperative in allowing the Lady Hornets’ best players to get significant minutes on the floor, which will give Poplarville the best chance to win. Part of avoiding fouls is staying disciplined on defense, so the players have worked on understanding when it’s best to go for a steal or let an opponent receive a pass.

“In all honesty I think we’re too aggressive. I really do think some of our fouls are not smart fouls. I think it’s because we go for the steal a lot and that’s something we must correct. There’s an appropriate when and how (to do that),” Jeffries said.

The team’s first opponent of the year will be the East Central Lady Hornets on Nov. 10 at home.

Heading into the game, the team will have three new starters and several underclassmen rounding out the squad.

Losing such a significant chunk of the offseason could’ve hindered some of the younger players development, but Jeffries said once the team was back in the swing of things the athletes’ inherent basketball skills returned.

Poplarville will be hoping the focus on fundamentals pays off against East Central.

“I don’t think (losing the practice time) makes that big of a difference because we’re all on the same page. We’ve been putting in our time at practice working fundamentals and the kids that have played, that stuff just comes back (naturally),” Jeffries said.