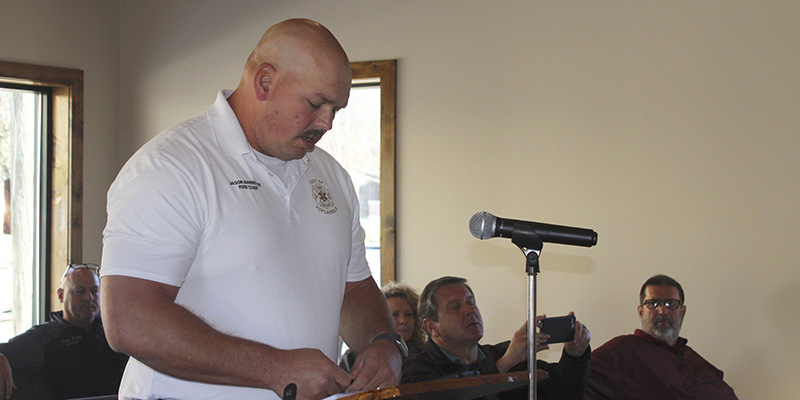 SQUAD 55: Poplarville Fire Chief Jason Bannister asks the Pearl River County Board of Supervisors for financial support to restart a program that ensures a firefighter is available in the north end of the county.

Poplarville Fire Chief Jason Bannister presented the Board with three potential options in three price ranges that would help restart the Squad 55 program during the regular meeting Monday. The program would be administered by the Poplarville Fire Department but be funded by the county.

Bannister said that at least two firefighters would be needed per shift to run the program.
Fire Services Coordinator Danny Manley said that the program would improve emergency response in the north end of the county. Often volunteer firefighters have day jobs, so are unable to respond to emergency calls in the day, he said.

“What this boils down to is I think that we need people available to operate the jaws of life when people get in car wrecks,” said Manley. “You can kill people by taking them out the wrong way. They can bleed to death in your arms when you pull them out if you don’t know what you’re doing, and time is of the essence.”

Manley said that having paid certified firefighters in the program might make it easier to train volunteer firefighters. He estimated that a firefighter in the north end of the county would get 10 to a dozen calls per day.

Bannister also said that the emergency response to the hayride accident that occurred Friday on Burnt Bridge Road in the south end of the county was excellent, but he is concerned that there would not be as many resources available to respond to that same kind of incident in the north end of the county.

“What scared me is if that same scenario happened on old Camp Road, it would not have had the same turnout,” he said.

County Administrator Adrain Lumpkin questioned the need to purchase a new truck for the program, but said he believed that the cost of staffing it would be relatively inexpensive at an estimated $65,000 to have one certified person staffing it daily.

District IV Supervisor Jason Spence said he’d like to know more about the donated truck before making a decision and District II Supervisor Malcolm Perry said that he would not vote for it if the volunteer fire department boards on the north end of the county are not in favor of the program. Board members agreed they should meet on Nov. 12 with the volunteer fire department boards who would be involved in the program.

In a separate matter, Safety and Inventory Director Jerry Bounds asked the Board to consider purchasing AED defibrillators for the new Courthouse Annex, the old Courthouse and Chimney Square, along with training employees how to perform CPR, because the need for such safety precautions in a courtroom was highlighted after a juror serving in Marion County passed away. The case was a Pearl River County case that had been transferred to Marion County, said Lumpkin.