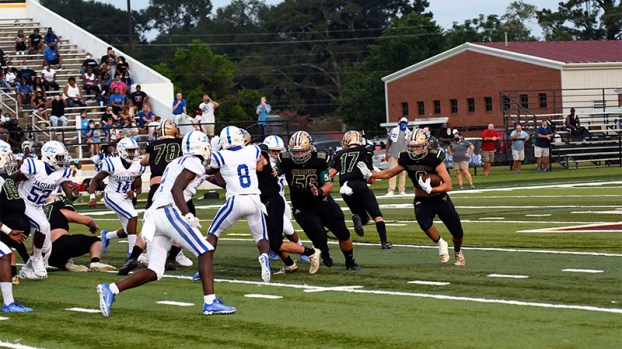 Pulling Guard: Guard Tyler Knight leads the way for running back Tyron Holston on a running play during a recent game. Photo by Jonathan Mitchell.

The Poplarville Hornets didn’t play a game last week because their scheduled opponent, Sumrall, had to forfeit the game after the school went into quarantine.

Poplarville already secured the district title and number one seed before the forfeit went in the record books, so the Hornets were able to use the week off to rest and recover.

The Hornets played a game for nine weeks straight prior to the bye week, and that many games in a row without a week off can lead to wear and tear on athletes’ bodies.

Head Coach Jay Beech said his team will be well rested heading into this week’s matchup against the Florence Eagles.

The Eagles are a four seed, but Beech said that can be misleading to those who don’t know the full scope of the season.

Just a couple weeks ago Florence defeated its district’s number two seed by multiple touchdowns, so Beech reckons the Eagles have had to deal with pivotal players missing games due to COVID-19, in turn leading to the lower seed.

“There have been some really good teams that have dropped seeding because of quarantine and stuff like that.

Offensively they spread it out, have some good receivers to throw it to and the quarterback can throw it a mile. Defensively they have some really big guys on the defensive line and their two linebackers are both over 225 pounds,” Beech said.

Florence’s size will have to contend with a dangerous Poplarville offense that’s predicated on hard-nosed, physical football.

The Hornets have overpowered their district opponents this year to earn the number one seed and will look to do so again when they face the Eagles.

“It’s something we’ve prepared for all year and (our physicality) set us up for a playoff run. We plan on just being physical and hopefully they haven’t seen a lot of that in the conference they play in,” Beech said.

The team started the year with a base set up and reduced number of plays offensively and defensively, but as the season has progressed, the systems have become more advanced in hopes of keeping opponents off guard.

Poplarville will look to have a few new wrinkles on both sides of the ball Friday night.

“We’ve been building. Generally we’re just adding to it throughout the year. We add a little bit to it every week,” Beech said.

The Hornets have two primary quarterbacks this year, Matt Will and Nate Anderson, who have split snaps this season as both players adjusted to the position.

Neither athlete saw playing time at quarterback last year during the Hornets’ playoff run to the state championship, so Friday’s game will be the first taste of playoff action for the duo.

Beech said the pair got the team this far in the season, so a wholesale change in approach won’t be necessary as game day approaches.

“They’ve both done really well for us this year. We’ve had a great year offensively and they’ve been doing a good job leading the way. They won’t have to do anything extraordinary or different this week other than what they’ve been doing,” Beech said.

The matchup against Florence will be at home for Poplarville and kickoff will take place at 7 p.m.