Building birdhouses at the Arboretum 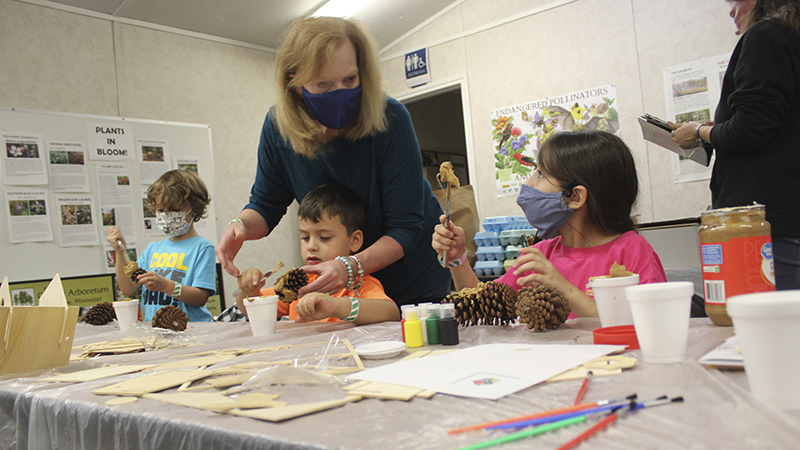 Children work with an adult to assemble and paint pre cut birdhouses. Photo by Cathy Cook

“I think it’s important to be creative,” said Sherri Lowe who was running the craft workshop.

This is the third crafting workshop that Lowe has run at the Arboretum in two months, and she’s planning to hold a Christmas themed one in December.

“I love doing crafts with kids,” she said.

Bonnie Holland brought her three grandchildren to the workshop. She thought an afternoon of crafting would be fun for them, and she wanted to honor the memory of her mother-in-law, Kathleen Holland.

“My mother-in-law used to spend a lot of time out here,” she said.

Mississippi School of Arts student 16-year-old Lillian Denney came to the workshop because not only is she a big fan of arts and crafts, but she was also tired of being stuck at home.

The workshop attendees created their own bird feeders with a hands on project. First they chose suitable pinecones. Five-year-old Gabe Holland was excited to choose the smallest pinecone for one of his feeders. Then they coated the pinecone in peanut butter before rolling it in bird seed. A bit of string or section of pipe cleaner was attached to make the birdfeeder easy to place.

For the first time, Lowe ordered birdhouse kits that simply had to be slotted together before attendees could paint them. But the class ran into some trouble when Lowe discovered the instructions for assembling the birdhouse kits had gone missing. Few pieces in the kits were alike, so it was unclear how or in what order the pieces should go together.

After Lowe scoured the Internet for a guide covering assembly of the avian homes, and through some trial and error, Building and Grounds Superintendent Terry Johnson came to the rescue. He figured out how to connect the slotted pieces together to create a row of small birdhouses, ready for painting.