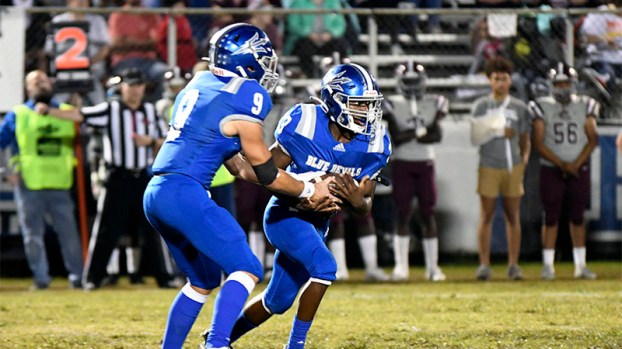 Hand Off: Quarterback Cameron Brunson goes to give the ball to running back Destin Coleman. Photo by Jonathan Mitchell.

Blue Devils moving into the offseason after unusual season

PRC’s final record on the season was 3-7 overall, 1-6 in district play.

Now the team will move into the offseason following a season that took place in the unprecedented circumstances of a global pandemic.

COVID-19 affected how the team practiced, prepared and traveled, but Head Coach Jacob Owen said the older athletes helped lead the way during this season like no other.

The team had several seniors in key positions that have now played their final game in a Blue Devil uniform, but the foundation they’ve built will help up and coming athletes continue to mold the program into the championship contender Owen envisions.

The athletes will begin offseason workouts next week as the team hopes the pandemic doesn’t force the closure of schools and cancellation of workouts.

Having missed out on all of spring football last year and some of this past summer, the offseason will take on an even greater importance this year with teams looking to make up for lost time.

However, Owen said he doesn’t want his athletes getting too ahead of themselves as the circumstances regarding the pandemic could suddenly change. “We’re just going to attack it day by day and not really think too far ahead because that’s kind of pointless at this point,” Owen said. Not only will weight lifting, conditioning and drills be a part of the offseason agenda, but off the field aspects will also be a focus. Getting the players to understand what is required of them, both on and off the field, will be a point of emphasis for the Blue Devils this offseason.

“We’re going to try to work hard every single day and focus on our culture mainly. First of all as a team, what kind of program we want to have here, what teammates we want to be and holding each other to that standard every day. That’s something that’s more important than lifting weights, more important than offensive and defensive systems,” Owen said.