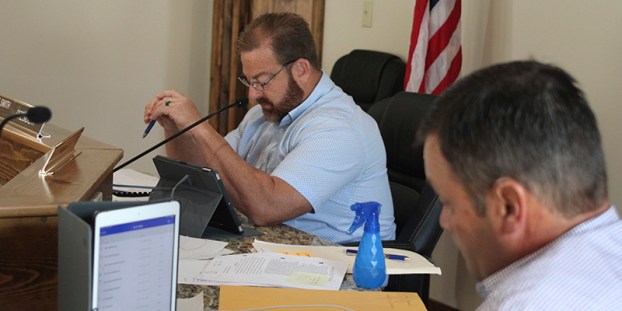 OFFICE SPACE: Pearl River County Board of Supervisors President Sandy Kane Smith said he did not realize PRVO offered classes during the regular Board meeting Wednesday. PRVO case manager Rozalind Magee came to the Board to discuss the proposed relocation of the Poplarville PRVO office. Photo by Cathy Cook

The bridge on Troy Dedeaux Road is currently closed because the old bridge was scheduled to be removed Wednesday.

Les Dungan with Dungan Engineering updated the Pearl River County Board of Supervisors on the project at Wednesday’s regular meeting. The tentative plan is to begin driving piling for the replacement bridge on Friday. Cranes are onsite and work to replace the bridge has begun, said Dungan.

Dungan also told the Board five bids were received for the demolition of the court facility building where Board meetings used to be held. The space will be turned into additional parking according to previous coverage.

The bids ranged from $47,500 to $96,578, and there were some complications in that one bid was delivered six minutes late and one did not have a bid bond, said Dungan. The Board decided to reject all of the bids and look into using county employees to demolish the building.

In a separate matter, case manager Rozalind Magee with the Poplarville PRVO office came before the Board with concerns about office space.

The PRVO office is supposed to move from the County Courthouse to the Health Department building. However, the space they are moving into will not have enough room for all of PRVO’s functions, said Magee.

“We deal with the elderly and the disabled, and with families that have a lot of kids coming in,” she said.

The PRVO office needs a waiting area, along with meeting rooms for the classes and health screenings, she said.

Board President Sandy Kane Smith said that the Board would discuss the issue when County Administrator Adrain Lumpkin was in attendance at the next regular Board meeting.

Smith said he did not realize the PRVO offered health screenings.

The next Board meeting is scheduled for Monday, Nov. 2 at 9 a.m.

Concerns lodged by a member of Picayune’s City Council led to the tabling of a matter concerning acceptance of the... read more