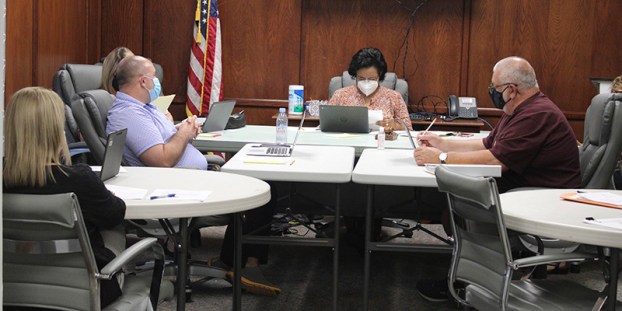 Members of the Poplarville School Board of Trustees discuss bids for hunting and fishing leases on 16th section land during Monday’s regular Board meeting. Cathy Cook | Picayune Item

The summer food service program at Poplarville School District was retroactively extended to the start of the school year in August. Students will have their student accounts credited for any money they spent on school lunches since the beginning of the school year.

Superintendent Konya Miller told the Board that the Legislature has set aside funds to help schools with broadband services.

The Poplarville School District will receive approximately $111,000 that has to be spent by the end of the year. Miller said if the district went through the normal bidding process, it would be unable to spend the money in time, so the Board approved using it for emergency purchases.
The funds will be spent on improving equipment teachers are using to stream to students, said Technology Coordinator Jill Melton.

The Board will be able to review and approve the invoices for each of the emergency purchases made with the legislative funds at the next meeting.

In a separate matter, the Board approved financial reports for June, July and August. The June and July reports were revised based on the district’s closing financial statements, said Sandifer. Board member Jason Baker asked if some of the negative funds were because the District is waiting to receive federal funds, which Sandifer confirmed. The district has to spend money then get reimbursed with federal funds, a process it also has to follow for some state funding, said Sandifer.

Miller said that the district had larger amounts of funds to purchase computers that it has not been reimbursed for yet. The district will get 1,500 computers in the next couple of months that have to be paid for upfront before being reimbursed, said Sandifer.

In other business the Board approved:

—An emergency resolution to allow administrative leave on the day the District was closed in preparation for Hurricane Sally.

—Testing security plans for the Poplarville Lower and Upper Elementary schools and the Middle School of Poplarville.

The next regular Board meeting is scheduled for Nov.9, at 6 p.m. at the district office.

Update, a possible description of the suspect vehicle has been obtained through the ongoing investigation. A black woman wearing a... read more