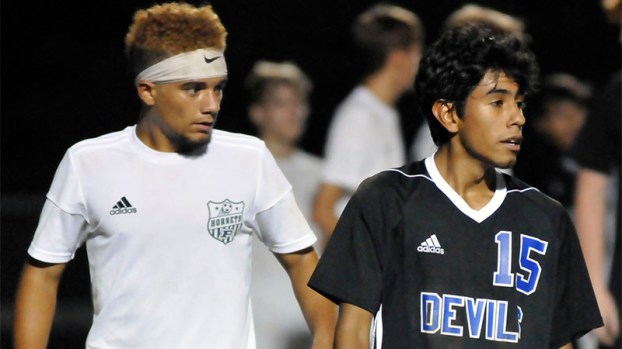 New Faces: Jorge Alcantara, on right, was a key attacking player for the PRC team last season. PRC will be betting on young players stepping up this season to fill the roles left behind by graduating seniors. File photo by Jonathan Mitchell.

The Pearl River Central boys and girls soccer teams lost several players from last year’s squad to graduation, and now have to rebuild with young athletes who don’t have much varsity experience.

Head Coach Joe Weems said that because of the inexperience in both squads this year’s practice sessions focused on the bare fundamentals of soccer.

“It always comes down to trying to tie up loose ends. We have such a young team that we’re still trying to get as many touches in as we can. (We’re also) going over the restarts and all those things that occur in a game,” Weems said.

The teams are in an unprecedented situation as they try to prepare for the start of their season in the midst of a pandemic.

Outside distractions are aplenty, but Weems said it’s important to not turn a blind eye to what’s going on because it could end up affecting PRC.

Even with everything going on, Weems said his young athletes have done a good job of staying locked in.

Once the players are on the field and in the routine of things, they start to forget about the pandemic and focus on soccer.

Considering the teams are so young, Weems is hoping the focus in practice leads to good chemistry on the field when competition starts.

“I don’t think it’s too difficult when in practice to keep them in focus. When it gets to game time what I’m more worried about is trying to get the players to blend as a team, with the boys especially being so young and a large percentage of them that have never played with each other,” Weems said.

The first games of the season will be Nov. 3 against Poplarville and the two matches will take place at Pearl River Community College.

Both matchups will help Weems better understand what players fit best in specific positions, and if certain athletes need to change spots in order to better perform.

Winning would be nice, but the main focus will be on making sure the players use their fundamentals correctly and remain calm under pressure.

“I want to see some of the things we’ve been focusing on like good touches, moving into space, noticing when teammates are in trouble and helping, communication. Of course we’d like to win, that’s the first goal is to win the game and secondly I would like to win it by playing well,” Weems said.

The boys and girls soccer teams for the Poplarville Hornets participated in a jamboree Monday evening with the teams playing... read more