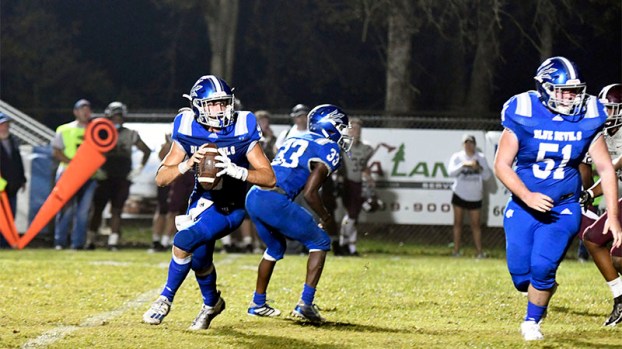 Roll Out: Quarterback Cameron Brunson runs to his right and searches for an open receiver in the end zone. Photo by Jonathan Mitchell.

PRC looking to turn things around this week against East Central

PRC’s players have to put that result behind them as the team prepares to take on the East Central Hornets this Friday.

Head Coach Jacob Owen said the loss wasn’t indicative of his team’s talent level or preparation, which is what made the game against Picayune so frustrating for Owen and his staff.

“The one thing I hate more than losing is not accurately representing who you are as a player and as a team. To me that was the most disappointing thing about the first half (against Picayune). I don’t want to take anything away from Picayune, they’re a fantastic team, but I believe we’re better than what we showed Friday night,” Owen said.

One of the bright spots defensively for the Blue Devils was junior linebacker Dalton Lee.  Lee spends time at quarterback as well, but his leadership and capability on the defensive side of the ball has made the junior a necessity for the Blue Devils this season. “Dalton plays in the center of our defense. He’s the one who gets all the calls, makes adjustments and gets us lined up right. He’s a leader over there, in the locker room and is overall a great kid. We depend on him a lot. Regardless of weather or opponent, he’s going to be the same. He’s going to give everything,” Owen said.

The loss knocked the Blue Devils out of playoff contention, so this week’s contest against the Hornets won’t have an impact on PRC’s postseason possibilities.

Some coaches, seeing as there wasn’t a playoff spot to fight for anymore, would opt to field a young, inexperienced team in the upcoming games in order to give some emerging athletes valuable time on the field.

That’s not the case for Owen or his staff as they look to finish out the season with a victory this week and a win next week against Gautier to finish the season.

“We’re not thinking about necessarily building for next year or anything like that. I believe our kids, this team, have worked hard enough to where they deserve me and my coaches to put a plan together that’s going to win right now, this week,” Owen said.

East Central presents a challenge for the Blue Devils as the Hornets sit at second place in district play with a 4-1 record this season. The Hornets will be coming into the game with a lot of momentum and confidence, but Owen said his team can win the game.

The final result will be affected by the belief and trust the Blue Devils have in themselves and in each other.

“I want our kids to believe and have faith. Faith allows things to happen. Faith is a power that comes from Heaven, and to have a fearless heart no matter who you’re playing. I believe when you have a fearless heart and you believe, that’s when big things happen. If our Blue Devils will have faith in themselves and their coaches, and be completely fearless Friday night, we’ll win,” Owen said. The away game for the Blue Devils will kick off at 7 p.m.

Poplarville’s boys soccer team has been practicing twice a day to get ready for the upcoming start of the season... read more