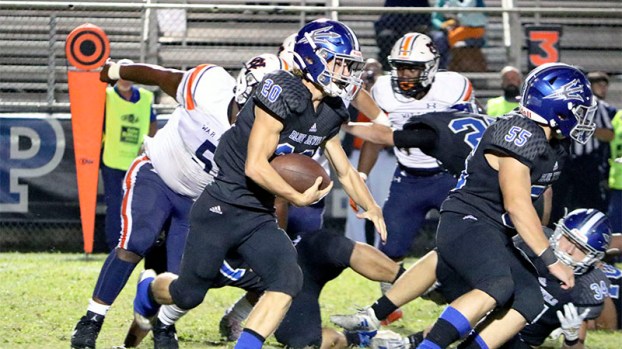 No Turnovers: Running back Roddie Powell follows guard Carson Cunningham around the edge during PRC’s game against Wayne County. Photo by Jeremy Pittari.

PRC looking to get first district win of season

The Blue Devils will be looking to get things back on track this week when they take on the Long Beach Bearcats away from home.

The district game will have playoff implications with Long Beach already having a district win while PRC looks for its first.

Special teams is something the Blue Devils take a lot of pride in, and Head Coach Jacob Owen said the group has done well this season by providing big plays and good field position for the offense.

“It’s kind of been up and down special teams wise, but we’ve had more ups than downs. We’ve played very well with the exception of the one football game against Gulfport. I think our special teams unit has put us in good positions to be successful. They’ve done a very decent job covering kicks and with punt coverage. They’ve also had some big runs on kickoff returns. I’ve been pleased with their play,” Owen said.

Offensively, the team has struggled to maintain the same level of execution.

PRC has the talent to run up the score, but when there is a misunderstanding and a player misses their responsibility that’s when drives can grind to a halt.

Against the Bearcats the Blue Devils will look to improve upon the mistakes made last week.

“I would like to see us be more consistent. I believe we’re capable of executing on offense and going down the field and scoring, but we have to be more consistent. We can’t be ok with missing blocks like we did last week. We have to continue to improve and get a little bit better every day and hopefully come away with a district win,” Owen said.

Sophomore running back Destin Coleman has been a weapon for the Blue Devils offensively as he’s gotten more experience this season.

Against Wayne County, Coleman accounted for 85 all-purpose yards so Owen is hoping the youngster continues to develop as the season progresses.

In a veteran backfield including senior Ty Herring, Coleman has plenty of seasoned players to learn from and lean on when confronted with an unfamiliar situation.

“Destin is a young man that loves the game and is very competitive. He really wants to be successful but is only a sophomore. He’s working on it and has gotten more mature, but he hasn’t had the maturity of playing a lot of football. Ty is a guy that we would love for him to emulate. Ty is someone who walks it every day and talks it every day. You know on Friday nights you’ll get 100 percent from him on every play,” Owen said. The game against Long Beach is currently scheduled to take place Oct. 9 at 7 p.m., but because of inclement weather the matchup could be moved to Thursday evening.

Owen said more information will be available later in the week when a decision is made.

Picayune back at home against Hattiesburg this week

The Picayune Maroon Tide football team will take on the Hattiesburg Tigers this Friday night in another crucial district game... read more