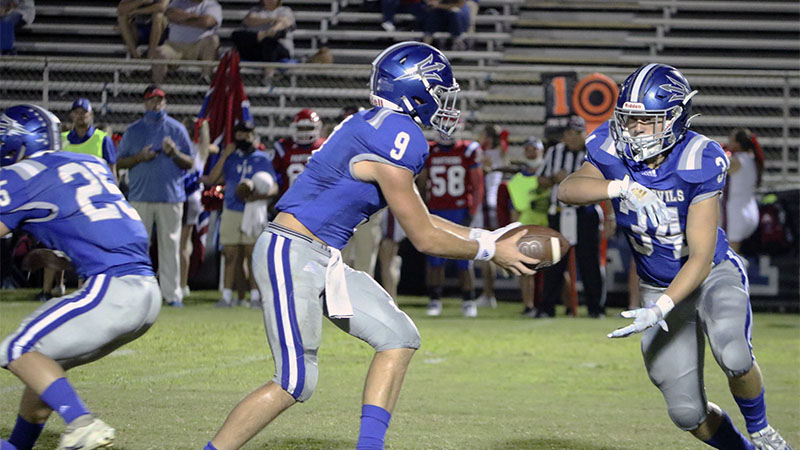 Senior Leaders: Quarterback Cam Brunson hands the ball off to wing back Eli Lavigne during a recent game. Photo by Jeremy Pittari.

Pearl River Central’s Blue Devils took on the Long Beach Bearcats last Thursday and came away with a 28-7 win.

The win pushed PRC to 1-2 in district play as the Blue Devils fight for a playoff spot.

Head Coach Jacob Owen said the win was an improvement on previous performances, but the team still had some work to do to reach its full potential.

“We’re still not where we want to be, so we have to continue to get a little bit better,” Owen said.

Offensive and defensive line play has been key for the Blue Devils this season.

Owen said the big guys up front don’t necessarily receive the attention some other positions may get, but that they’re just as important as any skill position player on the team.

The game last week was played on Thursday because Hurricane Delta was forecast to hit Friday evening, but the late change didn’t seem to affect the Blue Devils.

Owen said his players are happy to even have the opportunity to play given the COVID-19 pandemic is still in full swing, so changing dates is just a small inconvenience if the game can still take place.

“These kids, I really believe, are extremely ecstatic and blessed to play. I think they realize that and understand that. There are people all around them that have their games cancelled for one reason or another, and so far, thank the Lord, that hasn’t happened to us,” Owen said.

The win will serve as a building block for the Blue Devils as they head further into district play, this week against the Hattiesburg Tigers.

Hattiesburg is coming off a 49-38 loss to the Picayune Maroon Tide, and PRC will be hoping to make it two losses in a row for the Tigers.

“It’s a huge (win). We definitely needed some confidence, needed the win and hopefully that’s going to push us in the right direction as we go to Hattiesburg. They have some good football players over there, so we have to go over there and play exceptionally well,” Owen said.

The Blue Devils are looking forward to matching up with the Tigers physically, and Owen said a lot of the offseason conditioning and weight lifting work the athletes have done will pay off against teams like Hattiesburg.

The devil is in the details and PRC will have to get them right this Friday. “They have an athletic quarterback, some good running backs and wide receivers. It’s going to be a challenge, but it’s one that if we dig deep, focus and pay attention to detail we can go over and win that ball game,” Owen said.

The game against the Tigers will be away from home for the Blue Devils and will kickoff at 7 p.m.