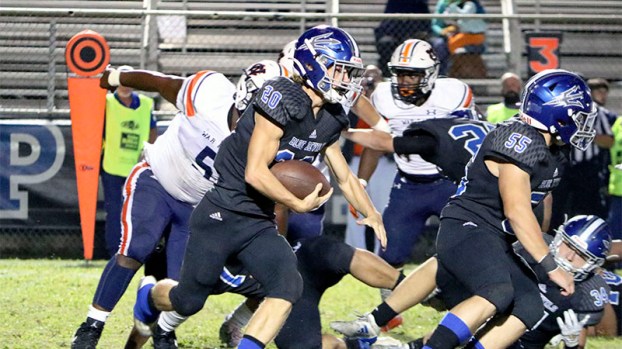 PRC’s game against Long Beach was moved to Thursday evening because of possible inclement weather Friday night as a result of Hurricane Delta.

The win snapped a three game losing streak for the Blue Devils, but more importantly secured the team’s first district win of the season.

Eight teams are fighting for just two playoff spots within the Blue Devils’ district, so getting a district win early in the season puts PRC in a good spot moving forward.

PRC was able to put up points offensively and defensively against Long Beach, which led to the lopsided win.

On the ground the Blue Devils’ offensive line punished the Bearcats and the backfield was able to take advantage of that.

Sophomore running back Destin Coleman finished the night with 144 yards on 12 carries and accounted for one of the Blue Devils’ offensive touchdowns.

Senior running back Ty Herring was once again a key part of PRC’s offense, amassing 101 yards on 10 carries while scoring the second offensive touchdown of the night for PRC.

The secondary came up huge for PRC against Long Beach as two interceptions were returned for touchdowns.

Senior safety Brady Johnson had a 65-yard interception returned for a touchdown while senior cornerback Xavier Lockhart returned an interception 18-yards into the end zone.

“We’re very thankful for the win, but what we’re looking for is a masterpiece. Something we can put out there on a Friday night that we can look at and say, ‘This is what we’re fully capable of.’”

“Until we do that we won’t be satisfied,” Owen said.

Playing on a Thursday is far from the norm, but given all of the other unusual circumstances surrounding this 2020 season, the players knew they needed to adapt.

Owen said the short week of preparation ended up not being that impactful as the team was already equipped with everything they needed to be successful against the Bearcats.

“As far as handling the short week, I think it doesn’t set you back. Preparation wise if you’re not ready to play Thursday night, you’re not going to be ready to play (in general). There’s not much done during a walkthrough or on Friday. I think the team responded well to the short week and we were able to get our first region win,” Owen said.

PRC will travel to Hattiesburg Oct. 16 to take on the Tigers for the team’s next game.