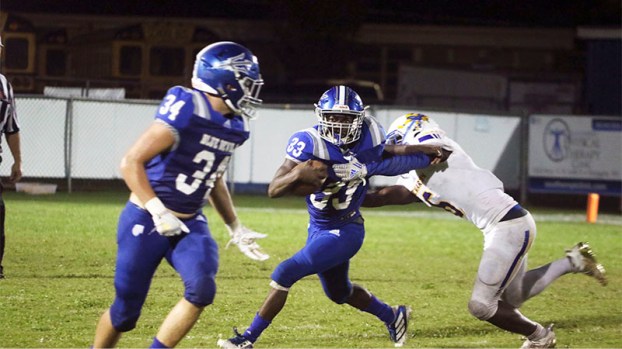 Strong Base: Running back Destin Coleman fights off a defender during a recent game. Photo by Jeremy Pittari.

The loss dropped PRC to 1-3 in district play with a key matchup against Picayune coming up this week.

PRC’s scores both came on 1-yard runs from tackle John Linden and running back Ty Herring.

Linden is one of the Blue Devils’ starting offensive lineman, but when the team needs a tough yard the offense lines up in a jumbo package with Linden in the backfield alongside the running backs.

Linden used his strength and size to force his way into the end zone for PRC’s first touchdown, then was the lead blocker for Herring on the second touchdown run of the game for the Blue Devils.

Head Coach Jacob Owen said his team showed the tenacity necessary to win the game, but a few errors ended up being the difference between winning and losing last Friday night.

“I thought our team as a whole defensively, offensively and special teams played extremely hard. They played their hearts out. We made a couple mistakes in crucial moments, but I couldn’t ask any more from my kids as far as effort goes,” Owen said.

PRC’s offense is meant to wear opponents down over time, and then exploit their fatigue to create scoring opportunities.

Owen said big plays are not a staple of the offense, but can become more frequent as the game goes on and the opposing team gets tired.

The level of competition also makes breaking off big plays difficult, and against Hattiesburg last week Owen said the talent within the region was obvious.

“We have to be satisfied getting four yards a play and doing it over and over again, being consistent with our effort. If we played a different schedule in a different region (then maybe there would be more big plays), but this is the SEC west out here,” Owen said.

Hattiesburg was already a formidable opponent, and penalties would’ve made them even more so, but Owen said his team had no offensive penalties against the Tigers.

That comes down to each player being disciplined and understanding their fundamentals, which is always a point of emphasis for Owen and his staff.

“We like to think we’re always pretty big on fundamentals. I believe the best people do the ordinary things better than anybody else. One thing that happened Friday night that hasn’t happened in seven ball games is we didn’t have any pre snap penalties. That was something I was happy to see,” Owen said.

PRC will have to take those fundamentals and execute at a high level this week with county rival Picayune coming to Carriere Oct. 23 for a district game.

Kickoff will take place at 7 p.m.

Picayune volleyball bows out of playoffs after loss to South Jones