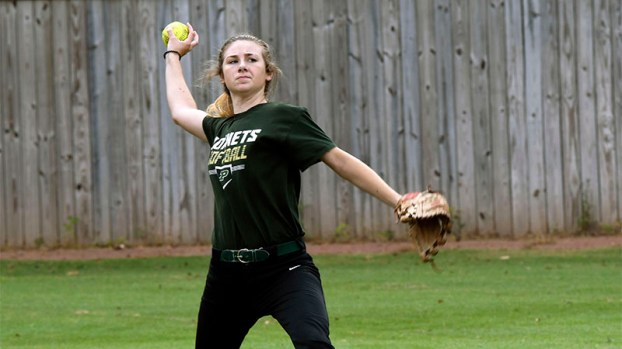 The Poplarville Lady Hornets softball team, like other spring programs, saw last year’s season end with little warning because of the COVID-19 pandemic, but used the offseason months to get back on track.

Head Coach Janessa Deckwa has about 25 athletes who come to practice every day, with some missing as they compete in other sports during the fall and winter.

Deckwa said things usually move pretty slow in the fall for the Lady Hornets, but because of the lost season and weird summer that involved a quarantine, the focus this year has been getting the athletes familiar with the sport again.

“We get back to basics, and focus on mechanics and fundamentals. We spend a lot of time in the cage hitting and working on defensive fundamentals. This week we’ll kind of pick it up a notch and move our way into batting practice and live defense,” Deckwa said.

It’s necessary to have a little bit of a refresher course for the athletes after having spent so long off the field, and the practices are building skills and habits that will hopefully translate to good performances on game day.

As the players go through their practices there are still plenty of COVID-19 protocols in place to try and keep the athletes safe as they prepare for the season.

Deckwa said the program has a backpack apparatus that’s used to spray sanitizer and it’s used consistently on not only equipment, but also the locker room and weight room.

Masks are required unless the athletes are outside working out. Deckwa said that so far the guidelines have worked in keeping the players healthy.

“We’re trying to be careful and do what we need to do, but so far everything has been going pretty good. We haven’t had any girls get sick so we’re thankful for that,” Deckwa said.

As the team gets back in the groove of things there are plenty of distractions that could affect the intensity of a practice session, especially with the athletes having to work out during a pandemic.

That’s when having veteran leaders on the team comes in handy for Deckwa as they help the younger players understand how things work in the softball program.

“We rely on upperclassmen a great deal to set that standard and lead by example. We go through everything that’s expected of them in the fall, then expect them to lead the pack and do their best to lead by example every day,” Deckwa said.

In the upcoming months the team will transition from drills centered on fundamentals to more game like situations.

Deckwa said it’ll likely take place in November or December and will consist of a best of three series that’ll see the Lady Hornets scrimmage against themselves to get some game action in before the winter break.

It’ll be the first competitive action for the team since the abrupt end of last season, which will be helpful for Deckwa and her staff when it comes to understanding the athletes’ strengths and weaknesses heading into the spring semester.

“They’re excited to get that going and excited to get in some of those live situations. We can start making decisions, testing them and give them the opportunity to show their growth and things like that,” Deckwa said.