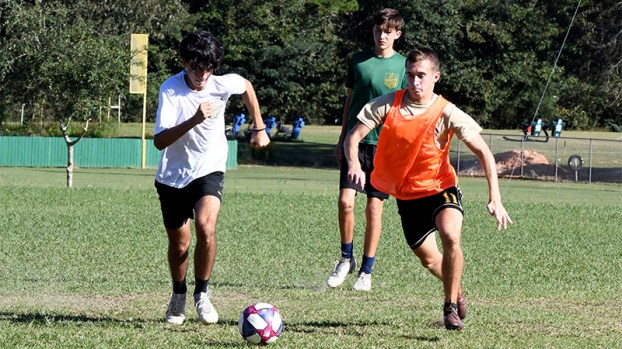 The boys and girls soccer teams for the Poplarville Hornets participated in a jamboree Monday evening with the teams playing a single half against two different opponents.

The boys team first took on the Laurel Tornadoes and tied 0-0, before playing the Petal Panthers where the team lost 1-0.

Meanwhile the girls team played Petal in its first matchup and tied 1-1, then beat Laurel 2-0.

Head Coach Luke Gipson said even though the team didn’t win either match, winning wasn’t the point of the jamboree.

The team is replacing three starters, and Gipson wanted to see those new players in action in order to judge what changes, if any, needed to be made.

“We’ve got to find who can play where at the highest level and then we have to mesh and gel as a team. Get some cohesion and link up,” Gipson said.

Gavin McGowan, who was an integral part of the Hornets’ midfield last season, dropped back and played both games as a defender.

Sonny Davis was a team captain and starting center back last season, but having lost him to graduation the Hornets are now on the lookout for someone to best fill that position.

“These first few games we’re training some of our younger defenders to take over, but Gavin wants to play wherever gives us the best chance to win. He played center back and was brilliant there, and that says a lot about him as a player and a person,” Gipson said.

The team already lost out on a lot of its practice and preseason games over the spring and summer because of COVID-19.

Now with case numbers once again rising in Mississippi, Gipson said his players are enjoying every second they have on the field knowing it could all end at a moment’s notice.

“The team (and I) have talked about treating every opportunity like it’s your last. I hate to be extreme like that, but it could be like that after seeing (what happened with spring sports last year). Even though there’s a lot of uncertainty with COVID, it’s brought the best out of us,” Gipson said.

Head Coach Beth McShea said she lost her starting goalkeeper from last year, so the jamboree gave her a good chance to evaluate the two athletes battling for that position.

“I have two people who have never started in a varsity game battling for goalkeeper. It was good to see them on the field in a game with varsity players in front of them,” McShea said.

The team has taken the COVID-19 practice protocols in stride as the players prepared for the season.

However, McShea said that after seeing what happened to spring sports last year her players are focused on the job at hand.

“I think seeing what happened to the baseball and softball teams last year, and then this year Sumrall volleyball didn’t get to play their playoff game, it makes them realize every game could be their last game. Every practice could be their last practice. It could all go away,” McShea said.

There are seven seniors in the squad and that’s helped keep the other athletes on task in practice and during this week’s jamboree games.

McShea said the experience and relationship between the veteran players has given her high hopes for the upcoming season.

“There’s a really good dynamic with the team this year. They all get along really well and have good chemistry. Because of that I do expect to have a good season and the girls are expecting it too,” McShea said. The team’s first true competitive game will be a “classic” on Oct. 31 at the Laurel Sportsplex Field.