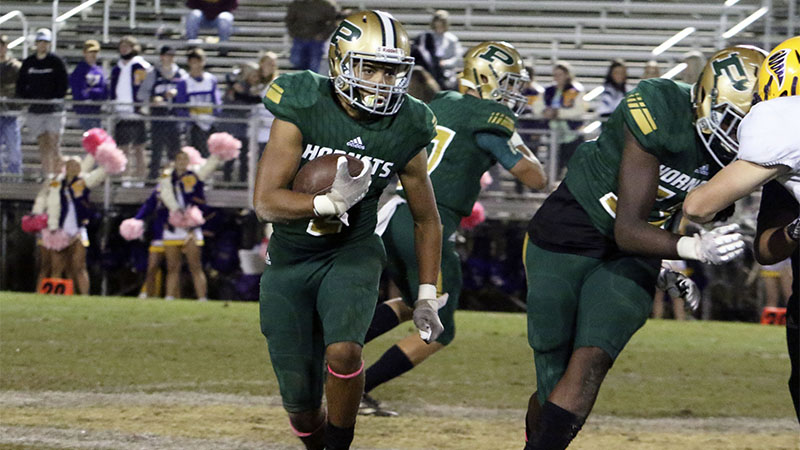 Move Outside: Running back Maurice Travis follows a lead blocker to the edge during a recent game. Travis had a rushing touchdown for the Hornets in their game against Purvis. Photo by Jeremy Pittari.

The Poplarville Hornets’ football team demolished the Purvis Tornadoes last week 35-7 and will look to do the same this Friday against the Greene County Wildcats.

Last week’s win against Purvis was another against a district foe, sealing the Hornets’ spot in the playoffs.

“I thought we played great in the first half. Offensively and defensively we executed pretty well. The second half didn’t finish out so well, but a win is a win and we’ll take it,” Poplarville Head Coach Jay Beech said.

Now Poplarville has a chance to earn the title of district champions if the Hornets can defeat Greene County Friday night.

The Hornets had a rough start to the season, but are currently on a four game winning streak.

Beech said his team’s performances at the beginning of the season weren’t indicative of the talent his team has, but over time the final product has been more reflective of the program’s potential.

“The first couple of games we were a work in progress, but we’re getting better every week. We’ve improved drastically on how we performed (to start the season),” Beech said.

The turnaround of the program and increasingly impressive performances has come with the team morale staying the same.

Beech said it’s important to have leaders in the locker room to keep the other athletes even keeled, whether things are going great or going terribly.

“You need some seniors that stay positive, even when things aren’t going well. You have to stay positive and keep faith in your system and what you’re doing,” Beech said.

An important part of Poplarville’s offense this year has been the ability to be dangerous through the air when the situation requires it. Quarterback’s Nate Anderson and Matt Will went a combined 4 for 6 with 86 yards and a touchdown last week through the air.

The two players will need to do the same against Greene County Friday in order to keep the Wildcats’ defense guessing.

“If their secondary guys are getting down (in the box) to stop the run you have to keep those guys honest. Going to the air keeps a defense honest, so we’re then able to still run the ball,” Beech said.

A win against Greene County would not only seal a district championship, but also the number one seed that goes along with the championship heading into the playoffs.

That’s a lot of pressure piled into a single game, but Beech said there’s a way to keep his athletes’ minds off the stress of the upcoming matchup.

“You just try to learn good technique and have great practices where they’re just worried about their job, and not worried about anything bigger than that,” Beech said.

The matchup against Greene County will be an away game for the Hornets and will start at 7 p.m.