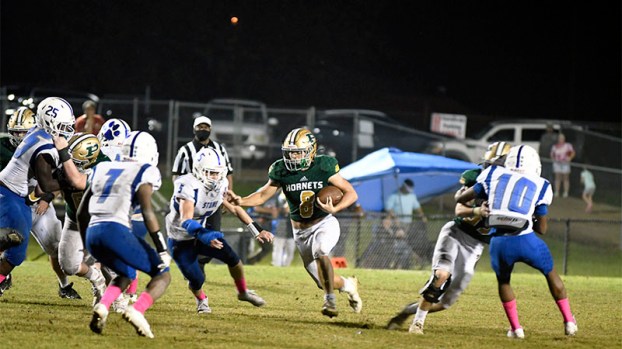 On A Roll: Running back Tyron Holston carries the ball up the middle and prepares for contact during Poplarville's win against Stone County. Photo by Jonathan Mitchell.

The game took place on Thursday night instead of the usual Friday evening because of the inclement weather expected from Hurricane Delta.

The win moved Poplarville to 2-0 in district play and increased the team’s win streak to three games.

After forcing a three and out from the Tomcats’ offense to start the game, the Hornets took possession and quickly scored as running back DJ Richardbey found the end zone for Poplarville on a 6-yard run.

Preston Stuart came on for the extra point and the kick was good to give Poplarville a 7-0 lead with 8:14 left in the first quarter.

The Hornets added to the lead with just under a minute remaining in the opening quarter when Richardbey scored for the second time on the evening, this time from 3-yards out.

Stone County then responded early in the second with a score of their own.

Quarterback Triston Hickman found running back Carlos Brown wide open in the flat and Brown waltzed into the end zone from 6-yards out.

The lead was 14-7 in Poplarville’s favor with 9:07 remaining in the second quarter.

After receiving the kickoff, Poplarville drove down the field for nearly seven minutes, and the drive was capped off with a 20-yard touchdown run from Richardbey for his third score of the evening.

The extra point was good, and Poplarville led 21-7 with 2:52 to go before halftime.

That score remained the same as the two teams went into the half.

Poplarville received the opening kick of the third quarter, and once again went on a long drive, this time nearly six minutes long, before Richardbey powered his way into the end zone from 6-yards out.

Another PAT from Stuart was good and it was 28-7 with 6:06 left in the third quarter.

Stone County answered on the next drive with Brown taking the ball in from 17-yards out to cut into Poplarville’s lead.

The third quarter ended with Poplarville on top 28-14.

The Hornets then started a drive on their own 27-yard line and marched down the field looking to add to the lead.

Quarterback Matt Will found pay dirt from 30-yards out on a quarterback keeper, that after Stuart’s PAT, saw the Hornets go up 35-14 with 5:33 remaining in the game.

The Tomcats needed a quick touchdown and got one.

Hickman found wide receiver Rylan Brown on a slant route and the speedster took the ball in from 46-yards out.

There was only 2:58 left in the game for the Tomcats to work with.

Poplarville was up 35-20 at this point and just needed to run out the clock, but Richardbey wasn’t done yet.

The running back finished off his stellar performance with a huge 71-yard touchdown run to put Poplarville out of reach 42-20 with just 1:23 to go in the game.

On the next possession defensive tackle Landon Foil recovered a fumble for Poplarville, which sealed the win for the Hornets.

Head Coach Jay Beech said he was impressed with his team’s tenacity and heart following the win.

“I’ve been a head coach here for seven years and I haven’t seen a group play as hard or with as much spirit (as these guys). Now we can build on it and keep going,” Beech said.

Next week Poplarville will play Purvis on Oct. 16 at home. Kickoff is set for 7 p.m.

Last year’s baseball season ended abruptly as COVID-19 forced the closure of schools and cessation of sports across the U.S.,... read more