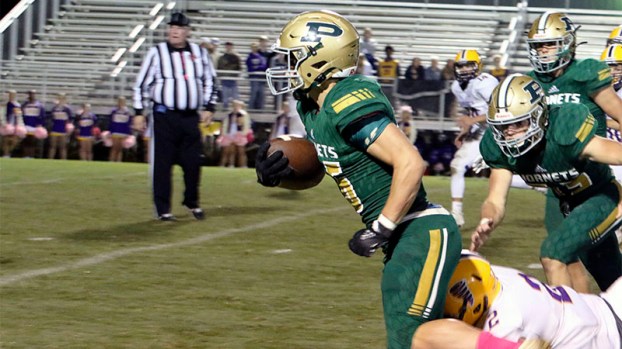 Shoestring Tackle: Running back Greg Swann tries to escape a defender's grasp during a recent game. Photo by Jeremy Pittari.

Last week’s victory not only brought the Hornets’ win streak to five in a row, but also sealed another district championship for the program.

Securing the district championship comes along with an automatic number one seed heading into the playoffs, which means the team will get to play its first postseason game of the year on its home turf.

Poplarville’s offense was dynamic against the Wildcats, finding big plays both on the ground and through the air.

“I think we’re establishing the run and hitting explosive plays in the run. Then people have to overload, or do more to stop the run, and that’s when we hit them on a pass play,” Head Coach Jay Beech said.

Matt Will and Nate Anderson split time at the quarterback position against Greene County to great effect.

Wide receiver Torry Polk had the other receiving touchdown and 69-yards receiving against the Wildcats.

Both quarterbacks are new to the position after being moved from the spots they played last year.

There’s been some growing pains, but Beech said both QBs have done well adjusting, including Anderson who is a senior.
“He’s brand new to the spot as well. He’s improved enough to get where he can get some reps in during the game. He’s done a good job of stepping up and putting himself in that position,” Beech said.

The Hornets’ defense got in on the scoring as well, with cornerback Dontae Buckley intercepting the ball in his own end zone and running 100-yards to the opposite end zone for the Poplarville pick six.

This is Buckley’s first year back with the team after spending a few years focusing on his basketball career.

There was a learning curve for the senior this season, but Beech said he’s continually improved and will be valuable come playoff time.

“It’s kind of like his first year of play. He hadn’t played in so long, but he has a tremendous amount of athletic ability. It’s taken him a little while to get used to the game again, but it’s starting to pay off later in this season,” Beech said.

The Hornets had originally been scheduled to take on the Sumrall Bobcats Oct. 30, but Sumrall High School is currently in full quarantine because of COVID-19, which means the Bobcats will have to forfeit the game.

The matchup will go into the record books as a 12-0 win for Poplarville as the Hornets wait and see who they’ll play for the first game in the playoffs.

A blistering first half from the Picayune Maroon Tide was too much for the Pearl River Central Blue Devils to... read more