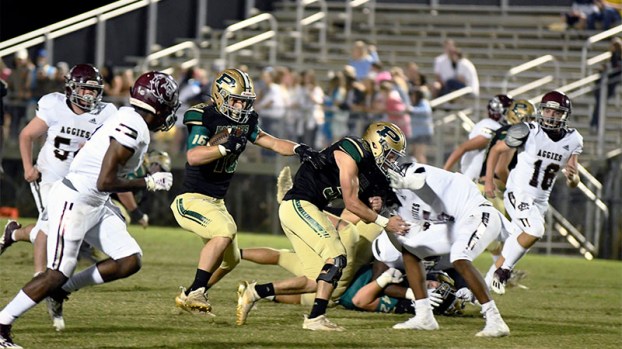 The Poplarville Hornets faced off against the Forrest County Aggies Friday night and won 69-8 for the team’s first district win of the season.

The Hornets’ offensive onslaught was too much for Forrest County to handle.

The scoring started early with running back Tyron Holston breaking free for a 60-yard touchdown run just under four minutes into the game.

Kicker Zach Carpenter split the uprights to give Poplarville an early 7-0 lead.

The Poplarville defense dominated the Aggies all night and forced a quick three and out from the Aggies on their first possession.

Another possession for Forrest County saw another punt from kicker Blaine Palmer to give Poplarville the ball back.

The Hornets once again struck quickly, this time through a 12-yard touchdown run from running back DJ Richardbey.

Kicker Preston Stuart came on for a successful PAT, giving Poplarville a 20-0 lead with 46 seconds left in the first quarter.

Poplarville’s defense also got in on the scoring when cornerback Torry Polk intercepted a pass from Forrest County quarterback Cody Bickford and took it to the house on a 50-yard pick six.

The Hornets recovered the ensuing onside kick and marched down the field once again.

Quarterback Matt Will forced his way into the end zone on a 1-yard quarterback sneak, and after the extra point Poplarville led 34-0 with 9:17 left in the second quarter.

The Hornets scored two more times before the half.

Holston scored again on a long run, this time on a 65-yarder, which was followed by a successful PAT from Stuart.

The lead widened from 41-0 to 48-0 when running back Maurice Travis found the end zone on a 27-yard gallop and Stuart’s kick fell true.

The second half saw the scoring settle a little bit, but the Hornets’ defense remained vigilant against the Aggies.

Quarterback Nate Anderson got in on the scoring action when he ran the ball in from 5-yards out late in the third quarter to give Poplarville one of its three scores of the second half. Stuart’s extra point helped the Hornets take a 55-0 lead into the fourth quarter.

Will got his second touchdown run of the night when he took the ball in from 12-yards out to start the fourth quarter. Another successful PAT by Stuart put Poplarville in the lead 62-0 with 11:05 left in the game.

The Aggies eventually found the end zone when running back Keeghan Rogers took the ball in from 6-yards out.

On the first play of the next drive full back Avan Jarvis took the ball in from 55-yards out, and Stuart’s PAT would be the final score of the night as Poplarville set the final score at the 69-8.

Following the blowout win Head Coach Jay Beech said his team was starting to round into form after a tough start to the season.

“This should motivate us to get better. We look like a champion (out there), but now we need to get it going,” Beech said. The Hornets play Stone County next week at home, with kickoff set for 7 p.m.

The Picayune Lady Maroon Tide volleyball team has played three games this week, and while two of them were losses,... read more