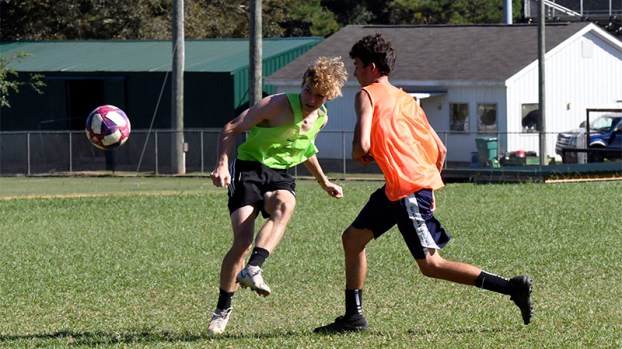 Outside The Box: Midfielder Bryson Andrews takes a shot from long range as defender Lane Ladner tries to block the attempt. Photo by Jonathan Mitchell.

Poplarville’s boys soccer team has been practicing twice a day to get ready for the upcoming start of the season as the team deals with high expectations coming into this year.

The majority of last year’s playoff team has returned, including eight seniors that‘ll play pivotal roles for the Hornets.

Last season the team had several young, inexperienced players in key position. That won’t be the case this year with the athletes now being able to draw from that playoff game and other tests from previous seasons.

The experience will be helpful given the fact that the team lost out on a good portion of their summer, which would not only include practices, but sometimes up to six competitive games as well.

Head Coach Luke Gipson said the summer is vital in helping him understand what formation to run and where to position certain players.

This year the Hornets lost out on that chance because of COVID-19.

“For us, we use the summer time to find out who our new leaders are going to be and what formation we’re going to run. I have a general idea of what we can do, but we didn’t get to experiment with that during a team camp or summer games (this year),” Gipson said.

Right now the team is still more focused on individual work in practice, which will then transition into more team based drills and competition closer to the start of the season.

Gipson has also worked over the past several years to get his junior varsity squad up to par.

Having a good feeder program is critical in a varsity team’s ability to stay competitive year after year, and emphasizing the importance of JV has allowed players to gain valuable game experience before making the leap to varsity.

“Making JV very important, with me as the head varsity coach coaching them just as hard as varsity, has been a huge benefit for us. Development wise that’s been huge,” Gipson said.

The season starts this week with a jamboree before real competition begins on Oct. 31, and the players know what’s expected of them.

All of the returning experience, along with the talent throughout the line up, means the pressure will be on the Hornets this season to live up to pre-season predictions.

“Expectations for me are high but years like this are the most tricky to navigate because you are dealing with high expectations. It’s easier if you’re an underdog. For us it’s to the point where if I’ve done my job well, I can step back and allow them to lead. When it’s coming from a peer the weight of leadership is so much heavier than if it came from a coach, whether it be positive or negative,” Gipson said.