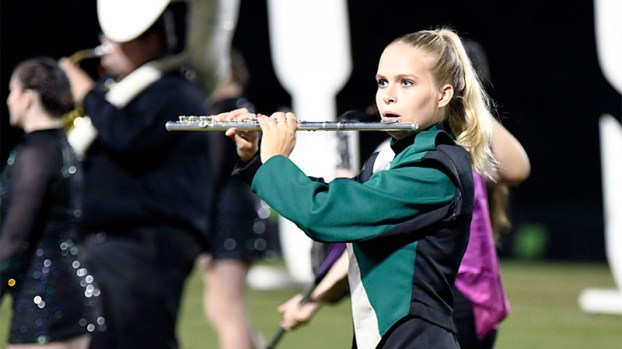 Poplarville’s band has had a strange year due to COVID-19 affecting band camp, rehearsals and cancelling fall competitions, but the musicians are still working to make sure the group’s halftime show is top notch.

Pandemic restrictions have limited the interaction between fans and musicians this year because the band is only allowed to perform at home games, which prevents the musicians from traveling with the football team to away matchups.

However, the group is making the most of the situation and improving each day while learning new musical pieces for this year’s show.

The difficulty of a halftime performance is that it requires musicality and good marching technique.

Musically the show is moving along and now the musicians have to pair their pieces of the show with specific movements across the football field.

It’s a difficult skill to learn, especially in a year with so many obstacles in the way.

“We’re still working on the marching aspect. They’re getting better at it and I saw much improvement from the past couple of weeks. They’re getting there, but that’s one of those longer processes, and it hasn’t been easy this year with the hurricanes and COVID-19,” White said.

The musicians have now performed several times in front of the limited capacity crowds allowed to attend home football games this year.

Each performance serves as another opportunity for the musicians to get more comfortable with their parts and marching routine.

As the comfort level rises the show will continue to improve.

“Once you get past the anxiety (of the first show) and gain confidence you enjoy the show you’re creating because you’ve done it before, you’re used to it. The reason everything is getting better is because they’re getting more comfortable,” White said.

If everything goes according to plan, the band is expected to perform 50% of its halftime show Friday night during the game against Stone County.

Slowly but surely more aspects of the show have been implemented and taught to the musicians.

It’s a lot to keep track of, but White said his musicians have done a good job this year of understanding instructions and doing the right thing.

“They’re very good about retaining what they’ve learned. (The staff and I) have also backed off a little so we can work on more stand tunes. The kids enjoy it and the parents seem to enjoy it, so we figured we’d throw some more stand tunes in there,” White said.