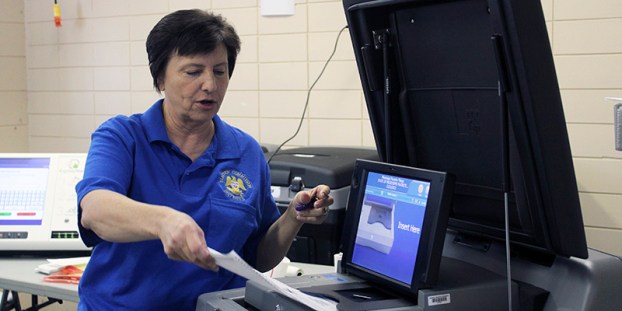 Election Commissioner Michelle Vogt demonstrates how ballots are put into the voting machine. The machine will notify the poll worker if part of the ballot is not filled out, so they can double check with the voter whether they want to fill the rest out before it is counted. Cathy Cook | Picayune Item

With less than 30 days before the presidential election, Pearl River County poll workers for the three precincts in District IV gathered Tuesday to train on the proper methods of checking voter IDs, managing the voting machines and properly handling affidavit ballots.

All but one poll worker at Tuesday’s training have worked in previous elections. Poll workers for all county precincts received training throughout the week.

The poll workers went over the logistics of managing the voting machines with Election Commissioner Michelle Vogt, including where to find the ballots, avoiding ballot jams, turning the machines on and off, making sure the vote count on the machine is zeroed out at the start of the day, the many seals on the voting machines and the importance of documenting any seal break.

The machines will notify the poll worker if someone has not filled out part of their ballot, so they can double check with the voter whether or not they want to vote on those issues before the ballot is cast.

The poll workers also reviewed how to check voter IDs. Any photo ID issued by a government entity is acceptable. The name on the voter ID may not be exactly the same as the name in the poll book, and that is okay, which is why it’s important for poll workers to double check the date of birth. Often women have an ID in their married name and are registered to vote with their maiden name.

“You cannot tell anybody that they cannot vote,” emphasized Circuit Clerk Nance Stokes to a room full of poll workers.

If someone is in the wrong precinct, the poll workers can call the Circuit Clerk’s office to find out which precinct they should be in. The training emphasized that it is a bad idea to guess which precinct a voter is in based on their address, as some precincts are split in unexpected places, such as down the middle of a street or between two houses on one property.

Poll workers may also have people come in who have been put on inactive voter status because the Circuit Clerk’s Office was notified that the person changed their address.

“We see a lot of people put on inactive status that had a P.O. box that closed,” said Stokes.

Stokes is expecting a large turnout on Election Day. In the last presidential election, the county had 2,500 voters. As of Monday afternoon, the Circuit Clerk’s office has already issued over 1,400 absentee ballots. The office had an influx of newly registered voters and in recent weeks has been printing 50 voter registration cards per day.

If a voter is not registered, does not have their ID or already voted absentee, but walks into a polling place on Election Day wanting to cast a ballot, they are directed to fill out an affidavit ballot. The affidavit ballots are sent to the Circuit Clerk’s office.

If the person was not registered, their affidavit ballot will not be counted in the election, but the Circuit Clerk’s office will follow up with them and see if they want to register to vote.

If the person did not have their ID on Election Day, they have five business days to bring their ID to the Circuit Clerk’s office so the affidavit ballot will be counted.

In person absentee voting will be available until 5 p.m. on Halloween Day.

Breast cancer screenings can help detect cancer early, but with the COVID-19 pandemic, many patients have not come in for... read more