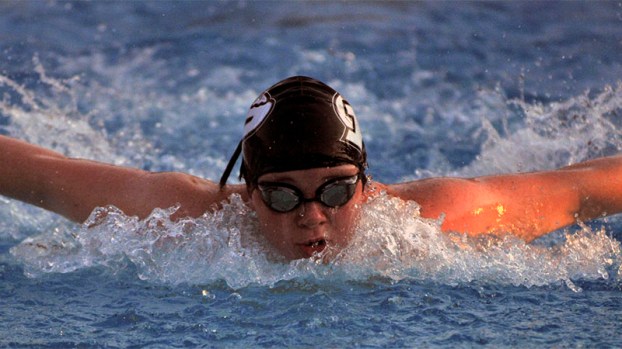 Experienced Swimmer: Ryder Burge is one of the few returning swimmers who had taken part in larger scale meets prior to the Biloxi meet this past weekend. File photo by Jonathan Mitchell.

Head Coach Rachael Rutherford said that between all of her athletes 99 seconds were cut off of times during the Demoruelle Meet, which is an indication the athletes are getting faster under Rutherford’s tutelage.

Rutherford said Jaden Hart, a new addition to the squad this year, cut 20 seconds off of his freestyle time.

The other positive aspect of the meet in Biloxi was that it gave some of the younger swimmers the opportunity to see what it’s like to race in a true natatorium with multiple teams competing for the top spots.

For the most part this year Picayune has only participated in dual and tri meets because of COVID-19 restrictions.
However, this weekend saw the Maroon Tide face off against several other teams in a controlled environment that included COVID-19 protocols to keep the athletes safe.

Rutherford said having that extra experience will help in the long run when the swimmers are put in high pressure situations at bigger stages like the South State meet.

“It’s definitely important because when it’s going to matter is at a bigger meet. For South State, if they get the times, it’s going back to Biloxi, and now they already have that experience of being able to have practice run in a pool like that,” Rutherford said.

The Maroon Tide’s team only has a couple more meets in which to earn South State times, starting with an Oct. 6 dual meet against PRC.

With chances to qualify for South State dwindling, Rutherford is making sure her athletes are physically ready for the upcoming competitions.

“It’s more about working on distance and endurance. I’ve been making them do lots of 200 meter and 400 meter races, so their bodies are used to the longer distance. That way when they get to next Saturday their body is like ‘I got this, I can do this.’” Rutherford said.

Since there are only two teams dual meets usually move quickly, which doesn’t give the athletes a lot of time to rest between events.

Seeing as next week’s meet against PRC was going to be a dual meet, Rutherford was looking for a way to slow down the pace and give the swimmers more time to rest.

Rutherford’s solution was to come up with a trivia game that will involve herself and PRC’s Head Coach Blake Rutherford, who is her brother, which will include questions in between each event to give the athletes a breather after a race.

“There will be trivia questions that both (Blake and I) have answered, and our teams are going to answer the questions to the best of their ability. At the end of the meet there will be a winner of which team knows their coach the best,” Rutherford said.

COVID-19 has changed the way the sports world operates and that truth is no different for the Picayune Maroon Tide... read more