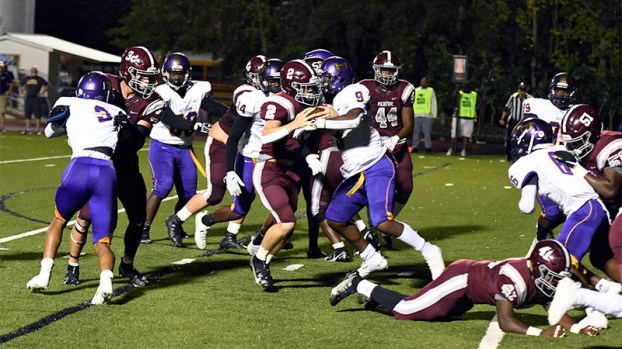 Getting It Done: Running back Austin Samples fights for extra yards as several Hattiesburg defenders try to tackle him. Photo by Jonathan Mitchell.

The Picayune Maroon Tide and Hattiesburg Tiger football teams went toe to toe Saturday evening, but it was Picayune that ended up winning 49-38.

The game had been moved to Saturday evening because of possible inclement weather caused by Hurricane Delta Friday evening.

Picayune started the game’s opening possession on its own 40-yard line, but put together a quick scoring drive that was finished off by an Austin Samples rushing touchdown from 1-yard out.

The teams then traded possessions until the Maroon Tide scored again, this time on a defensive play.

Samples read a route from his safety position, jumped in front of the pass from Hattiesburg’s quarterback Jordan Willis and took the interception 61-yards to the house.

Another PAT from Craft put Picayune up 14-0 as the first quarter wound down.

However, Hattiesburg came up with a quick response through a 65-yard touchdown run from wide receiver Chanse Duckworth.

Wide receiver Josh Jones came on to take the PAT for the Tigers and split the uprights to make the score 14-7.

That score remained the same until 7:15 in the second quarter when Duckworth finished off a 76-yard Hattiesburg drive with a 7-yard touchdown scamper to tie the game at 14 after Jones’ PAT.

Both team’s traded possessions in the second quarter before the Maroon Tide found the back of the end zone in the dying seconds of the half.

Picayune Quarterback Isaac Hickman forced his way in for a touchdown from 1-yard out, and Craft’s kick was good to put Picayune up 21-14 with just 47 seconds remaining in the first half.

Hattiesburg then fumbled the ball on its following possession and linebacker Andrew Willis recovered the loose ball for Picayune.

The turnover gave the Maroon Tide offense the ball on the Hattiesburg 9-yard line.

Picayune took advantage of the outstanding field position as Samples found pay dirt once again, this time from 1-yard out.

Following the PAT from Craft, Picayune led 28-14 heading into halftime.

Hattiesburg started out the second half with a massive touchdown pass from Willis that found wide receiver Jermel Ford who took it 77-yards to the house.

However, the extra point was no good from Jones, so Picayune maintained a 28-20 lead.

The majority of the third quarter was spent with both offenses trying to find some rhythm before the Maroon Tide finished off a 64-yard drive with a 1-yard touchdown run from Samples.

The PAT split the uprights, putting Picayune up 35-20 with 2:10 remaining in the third quarter.

The Tigers needed a touchdown quickly to keep the game from turning into a blowout, so Willis once again answered the call, this time with a 29-yard touchdown pass to Jones.

Hattiesburg went for the two-point conversion and failed, so with five seconds remaining in the third quarter Picayune led 35-26.

Picayune’s offense started the fourth quarter with the ball at its own 26-yard line, but Samples found a running lane and took off up the middle 74-yards for another Maroon Tide touchdown.

After the successful extra point, Picayune had a commanding 42-26 lead, but there was still plenty of game left to play.

Hattiesburg refused to go down without a fight, and on the next possession marched the ball down the field in just over two minutes as Willis found Jones on a 20-yard touchdown pass.

Once again the Tigers went for the two-point conversion and failed, which meant Hattiesburg trailed Picayune 42-32 with time winding down.

The Maroon Tide offense came on the field and proceeded to march the ball down the field, all the while wasting precious time, before Dawson Underwood took the ball in from 7-yards out.
The scoring drive took six minutes off the clock, and increased Picayune’s lead to 49-32 with 3:11 left in the game.

Hattiesburg got a consolation touchdown with 1:09 remaining as Willis took the ball in from 1-yard out, but Hickman recovered the following onside kick to seal Picayune’s 49-38 victory.

A win is a win, but Head Coach Cody Stogner said his team needed to clean up some fundamentals if the Maroon Tide wants to keep its perfect record intact.