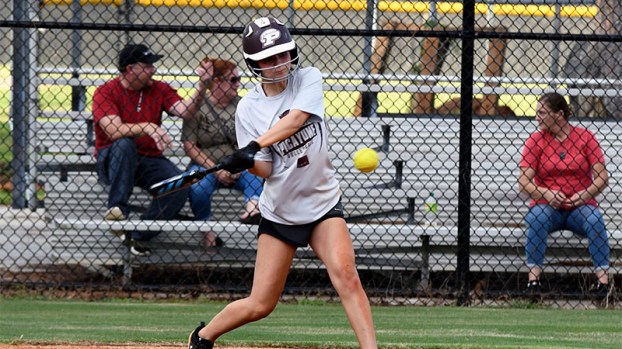 Head Coach Courtney Dickens said 21 athletes participated in the tryout where the players were put through a number of drills to test key fundamentals and player ability.

Players were first divided into group positions and then put through defensive drills.

Dickens said she had her infielders work on fielding and decision making during the tryout.

“I put them in certain situations where they had to make a decision on what to do with the ball.  I also had them turn some double plays so I could see footwork and hand-ball transition, getting it out of their glove,” Dickens said.

Following the defensive drills the athletes got the chance to show what they could do with a bat.

Again the players were split into groups.

One set took pitches from Dickens and looked to make contact while another group of athletes retrieved the balls that were hit.

The final group was in the batting cage where they went through several drills, including a bunt station where players had to show their skill at laying down a bunt.

Dickens said the main thing she’s looking for in an athlete at the varsity level is a good grasp of fundamentals.

An athlete knowing how to approach certain situations, along with a few other factors, helps Dickens determine who has the ability to be on her team. “I’m looking for kids I think can contribute, and make our program better and team stronger. I’m also looking at effort and hustle, especially at tryouts to make the team. That’s something I really key into,” Dickens said.

It’s still unknown how many of the 21 athletes who tried out will make the squad.

Several players who were part of last year’s squad tried out, and their position isn’t tenuous, but Dickens said there are off the field boxes her athletes have to check.

“First thing I’ll have to do is check grades and make sure they’re eligible. I’m also going to check discipline and attendance. I check all that stuff because if they’re not committed to coming to school and making good grades, then they’re not going to be committed to our softball program. We look at all those things,” Dickens said.

Dickens said there isn’t a softball class period until January, which makes it impossible for her to have her athletes working on the fundamentals of throwing and hitting.

However, she said she’s trying to set up workouts that’ll help with their conditioning prior to the 2021 season.

“A couple of days a week, right after school, I’m going to have them out to the field and have them do some conditioning so when we start in January they’re ready to go,” Dickens said.