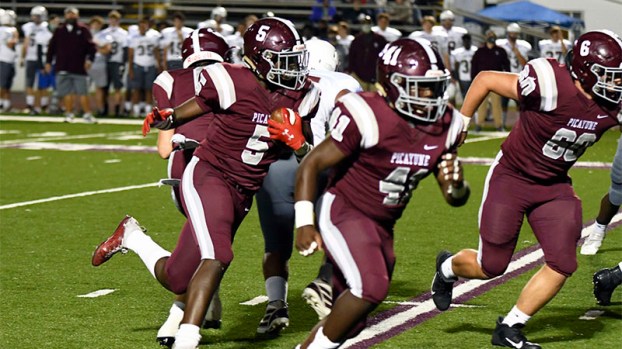 Picayune preparing for a rivalry game against PRC

Last week ended with a comfortable 42-13 victory for the Picayune Maroon Tide football team over the Long Beach Bearcats, but the team will now have to face off against county rival Pearl River Central this Friday.

The game against Long Beach didn’t have a perfect start with the Bearcats scoring twice on big plays in the first half.

However, Picayune’s players responded in the second half and played the way Head Coach Cody Stogner expected.

“All I told them is we have to play like we’re capable of playing. We have to control us. We can’t control who we’re playing, the officials, weather and we didn’t start off the game good,” Stogner said.

Picayune will be hoping to replicate last week’s second half performance over the course of four quarters against the Blue Devils Friday. A big part of that will be improving on special teams after giving up a kickoff return for a touchdown against Long Beach.

“Special teams stunk and that’s on me because I’m in control of special teams. This week we’re moving forward, we’ll move people around and work to get better at it,” Stogner said.

The large lead late in the game allowed Stogner to give some athletes playing time against the Bearcats who wouldn’t normally be on the field.

It’s an important move as the Maroon Tide goes further into the season because the games will get harder and roster depth will be vital.

“It helps with our depth and helps build towards (the future). The younger guys get to get a feel of what game speed is like against guys that are maybe faster or stronger than (them). Getting those extra reps you can’t replace in practice,” Stogner said. Picayune’s squad is full of seniors who have experience and leadership roles. Stogner said having those athletes helps when it comes to driving home the message of playing football the Picayune way, which is what the Maroon Tide did in the second half against Long Beach.

That message will be the same this week when the team heads to the Blue Devils’ home turf.

“(The seniors) took it over and got the younger guys on board. They’ve been here and been in the fire, so to say, while being successful. We rely on them to carry this team,” Stogner said.

The regular season is beginning to wind down and the games are starting to have higher stakes as the Maroon Tide and Blue Devils face off.

“It’s another game on the schedule and it’s the only one that matters this week. We’re going to prepare to play a perfect football game. I just want us to go out there and be good at us,” Stogner said.

Friday’s matchup will be an away game for the Maroon Tide. Kickoff is set for 7 p.m.

Tickets for the matchup between Picayune and PRC will not be sold at Picayune Memorial High School, Pearl River Central High School  or before the game this week. All tickets will have to be purchased through the GoFan.co app.

The Poplarville Hornets’ football team demolished the Purvis Tornadoes last week 35-7 and will look to do the same this... read more