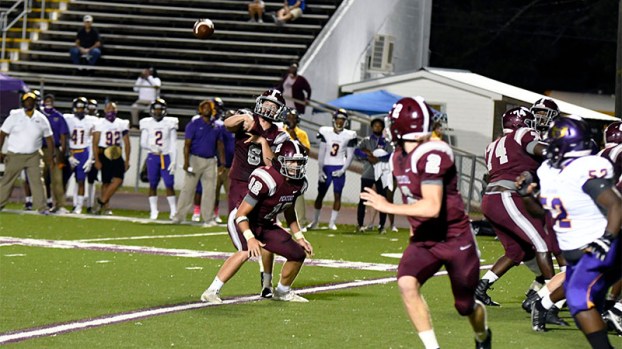 Through The Air: Quarterback Isaac Hickman slings a pass out to running back Austin Samples in the flat. Photo by Jonathan Mitchell.

Picayune’s Maroon Tide football team is coming off a hard earned 49-38 win over the Hattiesburg Tigers last week, and will now start preparations for its opponent this week, the Long Beach Bearcats.

Head Coach Cody Stogner said his team showed its potential against the Tigers, but there were still too many mistakes for his liking.

“We did the things we had to do to win, but we can get so much better. The defense was a bend don’t break type of deal (against Hattiesburg), so we have to work to get better so we don’t bend as much,” Stogner said.

The game against Long Beach will take place Oct. 16, a normal Friday evening game. That’s in contrast to last week’s matchup against Hattiesburg, which was played on Thursday because of Hurricane Delta. Stogner said his team’s adaptation to the new play date was helped in part by all the changes that have occurred this year due to the COVID-19 pandemic.

“Nothing has been routine for us (this season). So much of this year with everything going on has just been shooting from the hip and taking it day by day,” Stogner said.

Center Collen Penton, who is a senior this year, patrolled the sidelines for Picayune Thursday evening when he wasn’t in the game making sure his fellow teammates were dialed in and offered words of encouragement as the Maroon Tide battled the Tigers.

Penton’s leadership during the win didn’t go unnoticed, and his role will continue to be important as Picayune heads into battle against Long Beach.

“We knew we were going to rely on Collen and he does a great job. He loves Picayune football and loves his teammates, and he’s a pivotal member of our team,” Stogner said.

A big emphasis for the Maroon Tide during this week’s practices will be conditioning.

The Maroon Tide, like other teams across the nation, has had to deal with injuries and players being quarantined as a precaution after sitting next to classmates who tested positive. This means any given Friday night the line up can change, which has made the team’s depth even more important than in seasons past.

It also means players have to be in shape, from the starters all the way to the third stringers, because they never know when they’ll be called on to make a play.

“We’re also at the point of the season too where we’re in the back end of our district schedule, and in order for us to go as far as we want, we have to be in better shape. The games will get harder and more intense, so we have to get in better shape for those games,” Stogner said.

The matchup against Long Beach will also be Picayune’s homecoming game.

The festivities and fanfare surrounding the celebration could serve as a distraction for the athletes, but Stogner said his players know what the priority is when the lights come on Friday night.

“They play Picayune football, so I don’t have to do a whole lot to keep their minds focused on football. They know what’s expected of them and they want to win just as bad as everybody else. When you have a team that wants to win like we do, keeping them focused is not hard,” Stogner said.

Kickoff against the Bearcats is set for 7 p.m.

Tom Kelly has been teaching Shotokhan Karate for over three decades, but this year has to fundamentally change the way... read more