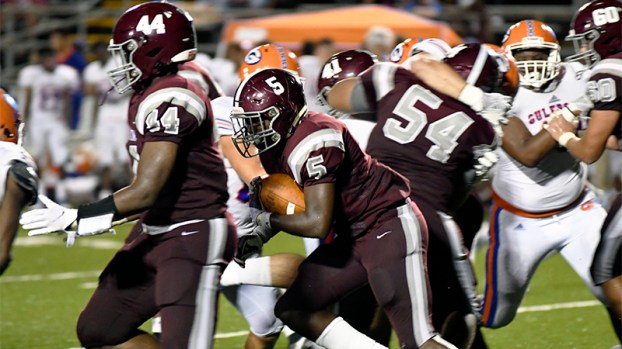 Shoulder The Load: Running back Dorian Robinson finds a running lane during a recent game. Robinson stepped up for the Maroon Tide last week and had 150 yards and three touchdowns against Gautier. Photo by Jonathan Mitchell.

Both offenses were able to put plenty of points on the board, but Picayune was able to come away with the win.

This year’s Maroon Tide includes veteran players who were part last year’s 5A championship team, and that experience leads to a level of self-confidence when the team gets into a tough situation.

“I have to give a lot of credit to our guys. They played for 48 minutes and never gave up. They never thought they were out of the game,” Head Coach Cody Stogner said.

Quarterback Isaac Hickman and running back Dorian Robinson led the offensive onslaught for the Maroon Tide.

Full back Darnell Smith found the end zone for Picayune as well, while wide receivers Amari Johnson and Jashawn Lee both had touchdown receptions.

Lee has been a constant threat on the outside when Picayune wants to attack teams through the air.

Stogner said because of athletes like Lee the team has the capability to score in multiple ways.
“It’s something we work on every day, something we’ve worked on since the summer time. It’s become a part of our offense and gives us an advantage (when teams load the box),” Stogner said.

However, the staple of Picayune football has been the team’s success on the ground, a skill the team successfully capitalized on against Gautier.

Robinson’s huge performance came with running back Austin Samples being out. Stogner said the senior shouldered the load for Picayune when the team needed him the most.

“We already knew what Dorian could do he’s very valuable for us. He accepted the challenge and did well. He did exactly what we knew he could do, there was nothing surprising for us. He’s a great player and a great competitor,” Stogner said.

The win against Gautier means the Maroon Tide is now 5-0 on the season and 2-0 in district play.

Picayune’s next matchup will be at home Oct. 9 against the Hattiesburg Tigers.

The Poplarville Hornets faced off against the Forrest County Aggies Friday night and won 69-8 for the team’s first district... read more