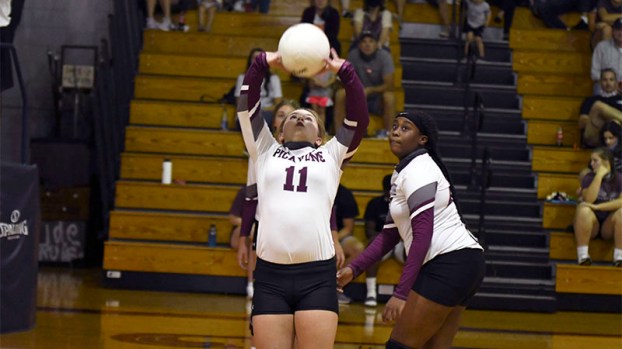 Stepping Up: Eighth grader Kaigyn Kulas sets the ball for her teammate during a recent game. Photo by Jonathan Mitchell.

The Picayune Lady Maroon Tide volleyball team has played three games this week, and while two of them were losses, Monday’s victory over the Hattiesburg Lady Tigers sealed a playoff spot for the team.

“My team really stepped up. I really think that gave them some motivation and they were really determined. They all played really well. Honestly I haven’t seen them play like that yet. That’s what I’ve been waiting for all year and I knew they had it in them,” Dickens said.

However, the straight set victory on Monday over Hattiesburg (26-24, 25-23, 25-13) was the game that truly mattered since it had playoff implications.

Players have rotated in and out of the line up all year, leading to several junior high athletes seeing significant playing time at the varsity level.

Barcley Martinez and Brooklyn Wilson are both in eighth grade, but have been entrusted with playing the key role of outside hitter for the Lady Maroon Tide this year as regular starters missed games.

Having so many young players in the line up has led to some growing pains along the way, but that means the athletes will gain varsity experience and the level of play will continue to improve.

“I think it’s important to get younger kids in because they need that experience. I don’t do it just to do it. If I feel like if they can help us win then I’m going to give them a shot,” Dickens said.

The youth movement has paid dividends with Picayune in the playoffs for the first time in the program’s three year history.

Not only did the Maroon Tide make it in, but the team will also have a first round bye because the possible first round opponents are not playing due to COVID-19.

There are still two more regular season games for Picayune on Oct. 6 and Oct. 8 against West Harrison and Pass Christian respectively.

However, those matchups will only serve as easy opportunities to give younger players more game experience and clean up things that need to be better for the playoff game.

The playoff matchup will take place Oct. 17, but the location and opponent is still unknown as teams across the state finish out the regular season.

There will also be plenty of practice time for Picayune to take advantage of before the second round game in two weeks, which Dickens said will start with fundamentals before transitioning into more game day situations.

“We’ll probably start out with fundamentals and the closer to the game it gets then I’ll start doing some scrimmages. Definitely serving and passing are really what we have to focus on still. Even though I think we’re playing better, I still want those two things to get better,” Dickens said.

The game against West Harrison next Tuesday will start at 6:30 p.m. and will be away from home.