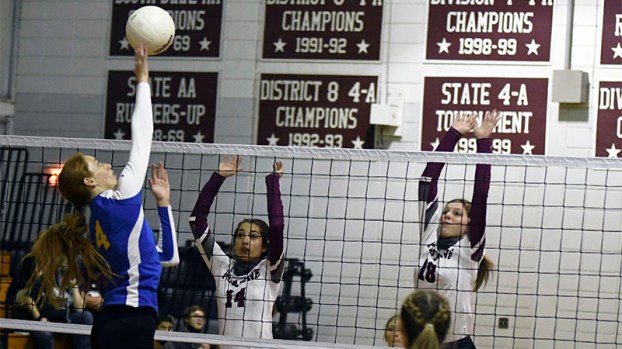 At The Net: Two Lady Maroon Tide athletes go up to block during a recent volleyball game. Photo by Jonathan Mitchell.

Head Coach Courtney Dickens said the emphasis heading into the game was self-improvement since the Lady Maroon Tide already secured a playoff spot.

This season has seen some ups and downs from Picayune as the team’s mentality shifted game to game.

Dickens has consistently tried to help her athletes understand that their intensity can never waver during a matchup.

Whether they’re up by 10 points or down by 20, Dickens wants to see her team exude the same tenacity no matter what.

That hasn’t been the case this season, which is why the team needed to use the Pass Christian matchup to improve the mental side of the game before the playoff contest on Oct. 17.

“At one point we got within three points and we were acting like we were down by 15. I know playing with such a young team that a lot of that comes from youth, but hopefully that’ll get better. We have to get better mentally,” Dickens said.

There were several areas the team focused on heading into the Pass Christian game that Dickens saw improvement in, including serving, blocking and overall defense.

Strengthening those areas was key as Picayune waits to see if Pascagoula or South Jones will be their opponent this Saturday.

It will be the first playoff game in the program’s three year history, and the athletes have put in the work to get to this point.

Now it’s a matter of staying focused on the task at hand, and not getting overwhelmed by the pressure that comes with a playoff game.

“I feel like players respond to coaches and if a coach is being all nervous it makes the players nervous. I’m really not a high intensity person, so I feel like as long as I can keep them under control we’ll be ok,” Dickens said.

The team is filled with young, up and coming talent, but there are some veteran players who have gotten plenty of experience since the program’s inception.

Sarah Stockstill, Kyra Hathorne and Makenna Williams have all been stalwarts for the Lady Maroon Tide this season, and Dickens said having that trio heading into a playoff matchup is helpful in keeping the younger players locked in.

“It definitely helps having girls with a lot of experience, not only in volleyball, but all those girls play other sports as well and all of them have been in the playoffs in other sports. That honestly does help because you still have that same (playoff) intensity, even in different sports,” Dickens said.

Picayune will head into the Oct. 17 matchup wanting a win, which means playing a complete game.

Dickens said her athletes have improved in certain areas as the season wore on, but the team hasn’t had a game where everything was clicking.

“I really want to see them compete and give ourselves the best opportunity, best chance to win. Everything we’ve been working on all year, serving, defense and hitting, I want to see it all come together,” Dickens said.

The Picayune Maroon Tide and Hattiesburg Tiger football teams went toe to toe Saturday evening, but it was Picayune that... read more