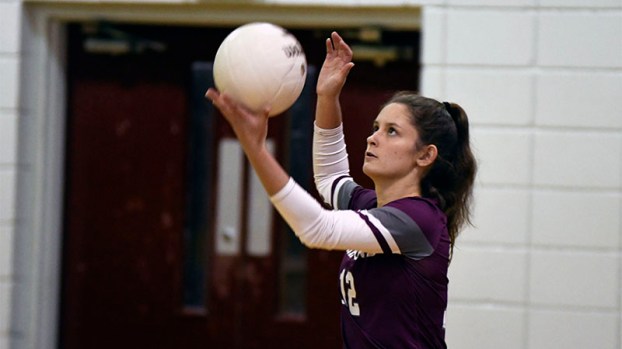 The loss wasn’t the result Picayune was hoping for, but the team has already sealed a playoff spot so the defeat won’t have an impact on the team’s postseason chances.

Head Coach Courtney Dickens said her team performed well offensively against the Lady Hurricanes, mixing up the offense by going back and forth between spikes and tip ins.

It was a good combination for the Lady Maroon Tide, and one that had been a focus in practice leading up to the game.

“We did a good job mixing it up. We’ve been talking to them about mixing it up some because you don’t want your offense to be the predictable pass, set and spike,” Dickens said.

Defensively the team struggled slightly with positioning, but part of that comes down to the team’s inexperience.

Due to COVID-19 and injuries, Picayune has had to constantly rotate in younger players to be part of the varsity squad this season, and those athletes don’t have the experience of a veteran player.

That can then lead to some miscues on defense, which will be something the Lady Maroon Tide looks to improve on in practice.

“I really do feel like defense comes from experience. We can tell them where to be, but you also have to read hitters, read the angle (of the hit), you have to watch the setter and pay attention to what side she’s going to set. I feel like the more they play that’ll come,” Dickens said.

One bright spot defensively for the Maroon Tide was Sarah Stockstill.

Stockstill is the team’s libero, a defensive specialist position, and she’s responsible for any serve or hit that comes towards the back line.

Dickens said Stockstill’s experience and ability to read the game is what makes her such a good libero, and over time more of the young players will pick up those same skills.

“She does a great job on defense which is why I have her in the position I have her in. She gets balls she’s not even supposed to get,” Dickens said.

Seeing as the team already has a playoff spot in the bag, some coaches would be tempted to rest some of the veterans, like Stockstill, to preserve energy and limit the potential for injury.

This in turn would lead to more inexperienced players getting game reps, but prevent the team’s starters from competing prior to the team’s playoff game on Oct. 17.
Dickens said because the team still has some things that need to be cleaned up in a game setting, the Lady Maroon Tide won’t be changing its rotation for the final regular game of the season.

“I’ve felt really good this year about how we’re doing our rotations because if somebody goes out there’s somebody ready to step right in. As far as that goes we’ll just keep doing what we’re doing because the way we have it set up they’ll just fit right in,” Dickens said.

Picayune’s final regular season game will be at home against Purvis and will start at 6 p.m. on Oct. 8.

The Poplarville Hornets are coming off a dominant 69-8 win over Forrest County last week and will now look to... read more