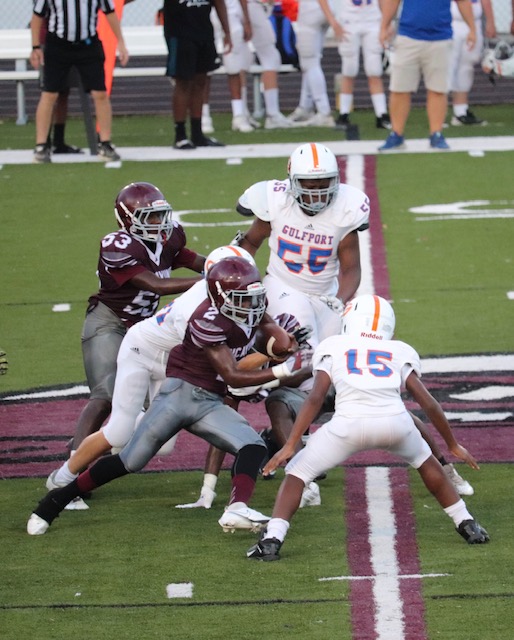 Competing For A Trophy: The Picayune Maroon Tide eighth grade football team has gone undefeated this season and has a chance to win the district championship Thursday evening.

The Picayune Maroon Tide eighth grade football team will take on George County Thursday evening in the District IV football championship with a chance to end the season undefeated.

Picayune’s junior varsity team is 6-0 on the season and looking to add one more game to the win column.

Head Coach Josh Robertson said his players understand the winning tradition of Picayune football having watched the varsity squad’s success over the years.

The youngsters know what it means to put on a Maroon Tide jersey and come Thursday evening will look to meet the expectations of a Picayune team.

“They’ve been watching Picayune football for many years and have been looking forward to this moment to play for this school. They’re used to seeing Picayune win and want to carry that torch. There are a lot (of players) that are self motivated that want to represent the school well,” Robertson said.

The focus with the team this season, and every season, has been fundamentals.

It’s Robertson’s job to prepare his athletes for high school competition and the rigors that come with it.

The lessons learned under Robertson’s tutelage will carry over and benefit players in the short and long term.

“We’ve been playing this kind of football for a long time. All we are is a feeder program trying to get them ready for high school coaches to keep it going when they get up there to high school. They need to know how to block, tackle and know how to pursue the football,” Robertson said.

The fundamentals of the sport have helped Picayune get this far, but George County is in the championship game for a reason.

Robertson said their Thursday night opponent can’t be underestimated, especially given the talent and tradition at George County.

“I know we’re facing a George County program that’s always been a hard nosed program and a talented program. They do things the right way over there. They have a winning tradition over there. It’s going to be a very tough game and we’ll have to play a very good football game (to win),” Robertson said.

Robertson’s message to his athletes this season has been simple.

Preparedness and discipline are emphasized, but the values preached by Robertson go beyond the football field.

Life after football is a reality for any player, and Robertson wants his players to be as successful off the field as they are on it.

“I take it very seriously. I take it more serious than most junior high coaches because I love this place and this community. It’s important for me to develop the kids, not only to be great football players, but also great young men,” Robertson said.

Picayune will host the championship game at Lee-Triplett Stadium Oct. 22 and kickoff will take place at approximately 6:30 p.m.

Picayune preparing for a rivalry game against PRC