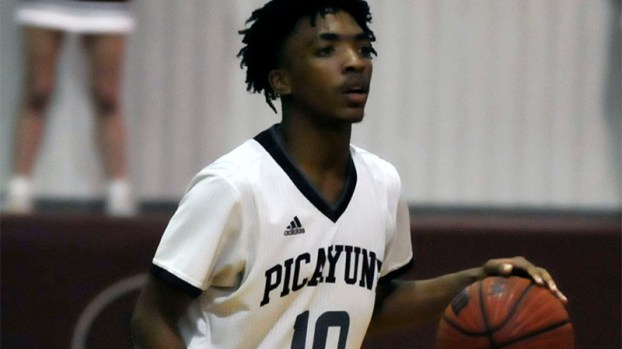 New Leader: Head Coach Eric Vianney is still looking for a leader to step up and take control of the team after having several seniors from last season's squad graduate. File photo by Jonathan Mitchell.

COVID-19 has changed the way the sports world operates and that truth is no different for the Picayune Maroon Tide basketball team as the players look to improve while dealing with a litany of pandemic protocols.

There were no summer games for the Maroon Tide and practices had a different feeling because social distancing was emphasized and the sharing of equipment minimized.

Daily routines of practice sessions remain, but the coaching staff and players are making the necessary alterations to abide by COVID-19 restrictions.

“We almost tried to reinvent how we do things with living in this virus time. When we were able to start exercising again the focus was to make sure nobody caught the virus,” Head Coach Eric Vianney said.

For the most part the focus so far has been on conditioning and weight lifting.

Vianney is still wary of having too much contact between players with the ongoing pandemic, so while there has been some practices involving basketballs and skill-based drills, the emphasis for the most part has been on the physical aspect of the sport.

There is also an ongoing search for who will step up as a leader for the team.

Having an athlete or two who sets the pace for the rest of the team is important, so as the season approaches the need for a couple players to fill that role will increase.

“We need a little bit more leadership and it’s

something you have to do every day. You have to be consistent. I would say that I’ve got a few guys who are trying (to fill that role),” Vianney said.

The team only has a couple more weeks to practice before games begin with the Maroon Tide scheduled to have a jamboree game Oct. 24 followed by a “classic” game Oct. 31.

Vianney is hoping to have a greater understanding of his team’s strengths and weaknesses by then, but because the team didn’t get to play any games over the summer, Oct. 24 will be the first taste of live action for the players since the end of the last season.

“This year the challenge is we didn’t play any games this summer, but we want our guys to be prepared and ready. That’s why you want your better players to be your hardest workers day in, day out to show the younger guys how to do things and hold each other accountable,” Vianney said.