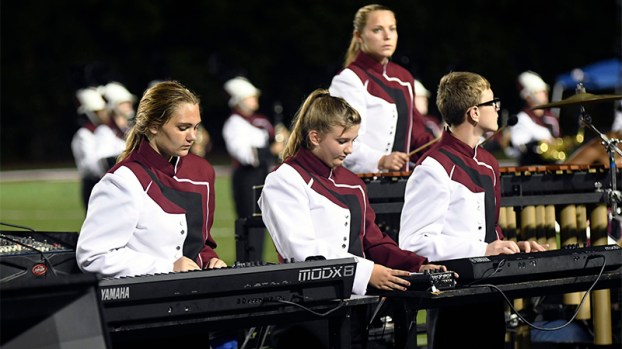 In what has been an unusual year, the Picayune Maroon Tide band took part in an unusual competition last Saturday where judges were brought to Lee-Triplett Field to rate a performance by the musicians just like they would for a state evaluation.

Band competitions this year have been cancelled because of the COVID-19 pandemic, but Picayune Band Director John Cockrell wanted to give his senior musicians one last chance to perform, while also showing younger musicians what it takes to earn good ratings.

The musicians’ hard work during this year of COVID-19 impacts paid off with the band earning all superior ratings from the three judges who evaluated the group.

Cockrell said performing in a familiar environment, along with the preparation that went into the performance, helped the band earn such good reviews.

“I feel like they were ready to go because we had them well prepared. This wasn’t a traveling performance this was on home turf. I don’t think the band was nervous and I think that’s a lot of why they did so well. They felt like they were prepared and it was just a normal day to them,” Cockrell said.

Usually when the Maroon Tide band would take part in a competition there would be dozens of other bands in attendance also waiting their turn to perform.

That wasn’t the case last weekend with Picayune having the full attention of the judges and spectators in attendance.

The band has had to adapt everything it does because of COVID-19, so performing in unusual conditions was just another obstacle the musicians overcame this year.

“I don’t think the environment had an impact. The goal was to make it as normal as possible (for the musicians),” Cockrell said.

Cockrell and the other band directors did this by trying to replicate routines and situations the band would normally be in during an evaluation.

The group will continue performing during the halftime portion of home football games.

Cockrell said the competition show the band had been performing, Through A Wood Darkly, will have its final send off Nov. 6.

After that, Cockrell said the band will transition into a more lighthearted show that’ll include routines from the color guard and dance team.

Looking back on the season as a whole, Cockrell said he was happy with his band’s work ethic and performance level this year.

“I think our kids worked really hard and I appreciate the effort they put in,” Cockrell said.