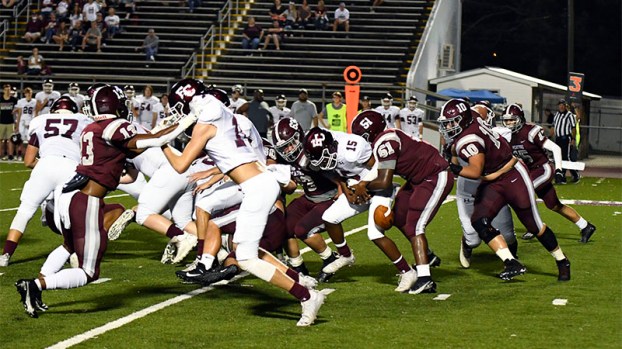 Picayune back at home against Hattiesburg this week

The Picayune Maroon Tide football team will take on the Hattiesburg Tigers this Friday night in another crucial district game for both teams where the Tide hopes to keep its perfect 5-0 record.

Hattiesburg comes into the matchup with a 2-2 overall record and is 1-1 in district play.

Picayune’s past two games have been tough battles, but the Maroon Tide has been able to come out of with wins.

The team has dealt with those high pressure situations, an experience that helps the players understand what it takes to win football games against top competition.

“Any time you deal with adversity and find a way to push through it, it makes you better. I like our chances if something were to pop up because our guys are pretty resilient,” Head Coach Cody Stogner said.

Another necessary component of any successful team is having strong offensive and defensive lines.

Football is a game won and lost in the trenches, and Picayune’s ability to continually have depth and talent in both units helps when facing off against some of the best teams in Mississippi.

“It doesn’t matter what level you’re at (they’re important). We wouldn’t be as successful as we have been without the big guys up front. We have four seniors that start on the offensive line and play some defensive line too. That’s something we take pride in,” Stogner said.

Picayune has been able to plug any holes due to injury or COVID-19 absence this season.

Depth is important for any team, but in a time where several athletes could be forced into quarantine any given day, it’s even more important programs have guys ready to step up.

Dorian Robinson did just that last week when he took over the starting running back role because Austin Samples was out. He went on to have a massive game on the ground with three touchdowns and 150 rushing yards.

The process as a whole means coaches don’t necessarily know who will be available come game time, so it’s hard to look too far into the future. “Here it’s day by day because you don’t know when you wake up who will be sitting at home,” Stogner said.

Due to forecasted inclement weather the game Friday could be moved to Saturday, but either way the Maroon Tide will be prepared.

Stogner said there are some things that need to get cleaned up before the team takes on the Tigers this week.

“We need to continue to move the ball like we have been doing the past couple of weeks. On defense we have to tackle better and we have to cover better.”

“Two weeks ago our defense won us the game, then this last week our offense won it. We haven’t put together a complete game yet,” Stogner said.

The game against Hattiesburg will be at home, and if it takes place on Oct. 9 kickoff will be at 7 p.m.

If the game were to be moved, the time and location will be announced at a later date.

Poplarville’s band has had a strange year due to COVID-19 affecting band camp, rehearsals and cancelling fall competitions, but the... read more