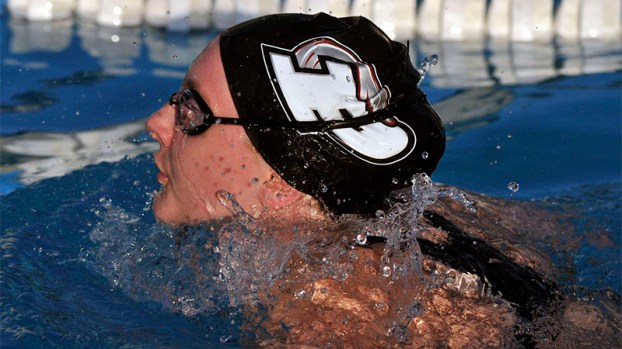 Heading To South State: Lily Ginn is one of the Picayune athletes that will be heading back to South State after qualifying last year as well. File photo by Jonathan Mitchell.

The Picayune Maroon Tide and Pearl River Central Blue Devils swim teams took part in a dual meet Tuesday evening that served as the final competition before the teams head to the south state meet.

Swimmers from both teams used the meet as a final chance to earn a south state qualifying time.

Both teams will be sending numerous athletes to the south state meet on Oct. 17 with a chance to move on to the state meet.

While the meet was the athletes’ final shot at getting a south state time, the coaches wanted to make the final regular season meet of the season enjoyable.

The athletes were asked a set of questions about each coach, and while it added a fun twist to an otherwise normal meet, it also helped slow down the pace of the meet to give athletes more time to rest in between events.

Picayune won, which meant the PRC swimmers had to do a forfeit.

Maroon Tide swimmers lined the sides of the pool and created “waves” the PRC athletes then had to swim through.

“I think for our guys and girls who didn’t have (south state) times, or wanted more, I think loosening up and having fun gives them a little more juice in their system. They responded well,” Blake Rutherford said.

Now the two teams will focus and get down to business preparing for the upcoming south state meet.

Fine-tuning little things like starts, turns, relay transitions and finishes will all be on the agenda for the athletes.

Every athlete now knows what event they’ll be competing in, so the focus will be on those specific strokes for the rest of practice sessions.

“I already released the names of the kids going to south state today, so starting tomorrow they’ll be stroke specific for the next week and a half. If they have breast stroke and free then that’s all they’ll work on,” Rachael Rutherford said.