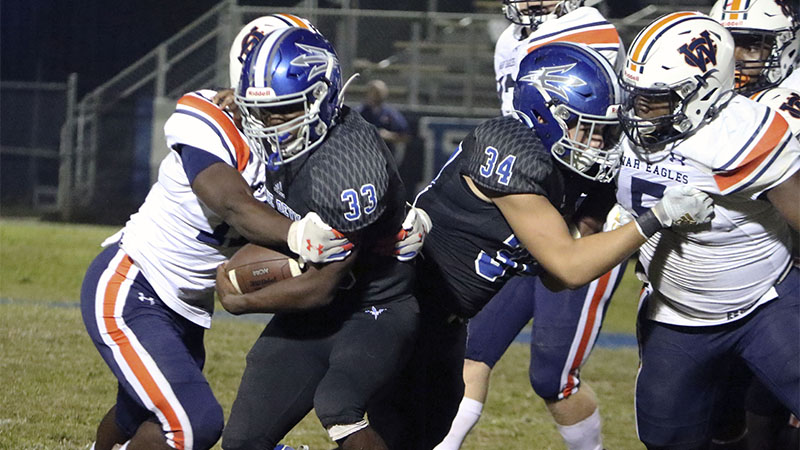 Physicality: Running back Destin Coleman fights off a tackler during a recent game. Coleman went for 56 yards on 10 carries against Hattiesburg last week. Photo by Jeremy Pittari.

PRC is coming off a close loss to Hattiesburg 22-13 that put the Blue Devils in a tough situation. Now PRC will have to win the final three games of this season to have a shot at the playoffs.

The first of those wins will have to come against the Maroon Tide Friday evening and quarterback Cam Brunson is sure to play a key role for the Blue Devils in the heated matchup.

The senior plays the majority of snaps on both sides of the ball and Head Coach Jacob Owen said Brunson’s performances this year have shown the starter’s toughness.

Owen’s program knows what needs to be done in order to have a postseason; it just comes down to execution.

Before the season began the team had the expectation of playing postseason football and now will have to fight to keep that dream alive.

“We had really high expectations going into this season and we find ourselves in a situation right now where we have to win out in order to make it into the playoffs. I believe that we can. This is a region where anybody can beat anybody on any given night,” Owen said.

While the result may not have been what the Blue Devils wanted last week, Owen said the game against Hattiesburg showed the promise his team has moving forward.

“Friday night against Hattiesburg was a step in the right direction for us. Now we have to play a little better than we did (last week), this week,” Owen said.

However, Picayune represents a different kind of opponent.

The Maroon Tide is 7-0 this year under new Head Coach Cody Stogner, but Owen said his team knows what it’ll take to beat their cross county rivals.

“Picayune is going to be a tremendous task for us, as well as anyone else. Coach Stogner has done a fabulous job over there in his first year and Picayune hasn’t missed a beat this year,” Owen said.

Heading into the game Owen just wants to see his players perform at a high level against the Maroon Tide.

“I want to see our guys compete hard with great attitude and not get any personal fouls.”

“It’s a rivalry game and can be pretty heated. I want us to compete, be intense and be disciplined at same time, which is very possible,” Owen said.

Kickoff between the rivals will take place at 7 p.m. with the Blue Devils having home field advantage.

Tickets for the matchup between Picayune and PRC will not be sold at Picayune Memorial High School, Pearl River Central High School  or before the game this week. All tickets will have to be purchased through the GoFan.co app.