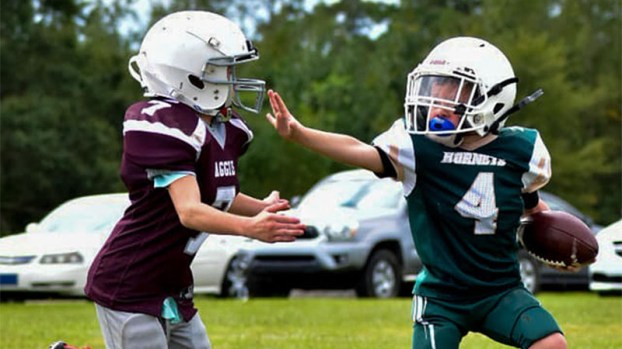 Youth Football: The Poplarville Athletic Association's fall football program is about to wrap up following a successful season.

The Poplarville Athletic Association’s fall football season is nearly over with athletes and parents alike enjoying the chance to see the sport take place amidst the ongoing pandemic.

However, the PAA has had to make some changes to adapt to the new reality of COVID-19.

In years past, the organization’s football teams competed on the football field at Poplarville High School.

Because of COVID-19 restrictions, the district couldn’t give the PAA access to the field due to limits on the number of people using school facilities.

So instead of playing at the high school, the PAA has been having games at Dobbie Holden Stadium on the Pearl River Community College campus.

The field is made of turf, not grass, so weather doesn’t have as big of an impact on whether or not a game can be played.

PRCC is also running the concession stand, meaning the organization didn’t have to try and find volunteers to work on game days.

Walker said the biggest positive of playing at PRCC is that friends and families can attend games without having to worry about attendance restrictions.

There is currently a 50 percent attendance cap on football games in Mississippi, which was set by Gov. Tate Reeves earlier in the year.

Because the stands at Dobbie Holden Stadium are so large, Walker said the 50 percent capacity allows for more than enough people to attend the games.

“It’s pretty much our normal crowds that are getting to go out to games and what not,” Walker said.

“I believe during the practice time before the season started we had maybe one or two that had potentially either tested positive or possibly been in contact with somebody, so as a precaution they stayed away for a little bit. Outside of that we haven’t had issues with (COVID-19),” Walker said.

Walker said the excitement throughout the community building up to the season has continued as games took place, but the ongoing pandemic has led to a decrease in numbers for the organization.

“Coming out of COVID and stuff we were short a couple dozen players from last year. It’s a pretty significant drop, but overall impact of the season has been similar to seasons past, even though we’ve been short people,” Walker said.

The regular season will end on Oct. 31.

Playoffs will then take place the following week with the championship game following the week after.