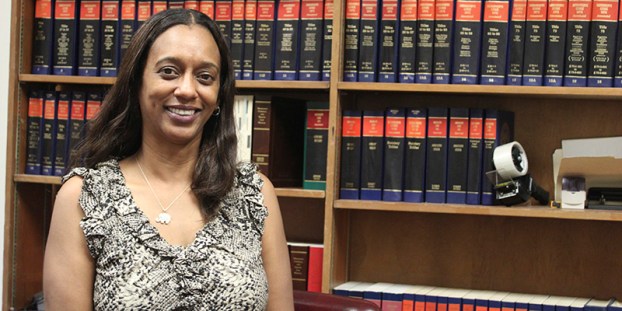 Pearl River County assistant public defender Theressia Lyons was recognized for her work with a 2020 Top Influencer Award from the Success Women’s Conference.

Theressia Lyons was awarded a 2020 Top Influencer Award by the Success Women’s Conference Saturday. Lyons began working for the county in August. She has a 19-year career in law and previously worked as a public defender for Harrison County.

Lyons said it was surreal and humbling to receive recognition for the work she does.

“Most of what we do is in the courtroom behind closed doors,” she said.

She began her career as a prosecutor for Harrison County for six years, and then became a public defender before going into private practice. She returned to Harrison County’s public defender’s office because she wanted to focus less on running a business and more on the individuals she’s representing.

Becoming a public defender gave her the opportunity to show more creativity in her work than when she was a prosecutor.

“As a public defender you get to know the person,” said Lyons.

“These people have families. They have their own issues…We have to treat the whole person.”

People often have misconceptions about public defenders and the work they do, said Lyons, and may think of public defenders as lawyers who are less skilled or uncaring. Lyons said she always cares about her clients and treats them the same whether they are accused of felony shoplifting or capital murder.

“I always tell the client, I’m not going to jeopardize your freedom or my reputation…I always want people to know that whatever I did, I did my best.”

While being a Black woman in a male dominated profession has presented some challenges, Lyons has never let that intimidate her.

The biggest challenge in her career has been being a single parent with a demanding profession.

“Being able to manage who you are here and being mom, it’s a totally different hat to wear,” she said.

She attributes part of her success to her parents and family, who have offered support and pushed her to “rise above and do better.”

“My mother has been my biggest supporter and she helps me out tremendously.”

Lyons makes sure her own daughters understand that “to whom much is given, much is expected.”

One of her biggest passions is reducing recidivism, and in the future she hopes the public defenders office can partner with businesses on a recidivism reduction program.

In December the public defenders office will be holding a “Know your rights” seminar at Chick N Stick in Picayune to help people understand their rights when they interact with law enforcement.