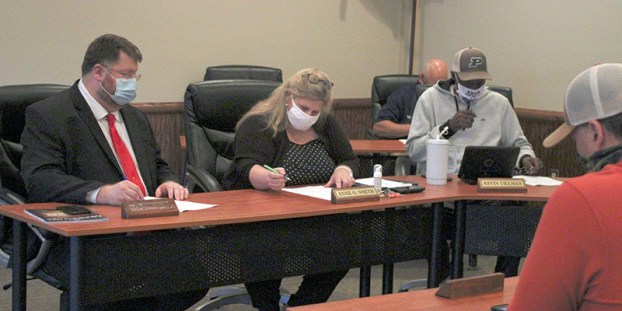 All Board members were physically present at the regular Board of Aldermen meeting Tuesday.

Fire department to get new software

The Poplarville Fire Department is getting updated software that will make it easier to apply for grant funding at no cost to the city.

Assistant Fire Chief Donald D’Antonio updated the Board of Aldermen during Tuesday’s meeting that the state is changing the department’s software. The new software will have a better user interface and can harvest more data. Having more of that data compiled will make it easier for the department to gather information they need when they apply for grant funding, said D’Antonio.

The Board also approved a travel request for the fire department to send Hunter Averett to take the Candidate Physical Agility Test in March.

In a separate matter, the city received seven bids for the construction of a pavilion and bathrooms at City Square Park. Architect Christian Landry said the bids were highly competitive for the project’s size. He asked the Board to take the matter under advisement while he verifies two of the lower bids.

In a separate matter, the Board approved two water bill adjustment requests, one for a home on Maple Street and one for a home on Todd Street. Mayor Rossie Creel said that while neither of the homeowners requesting the adjustments could find leaks, the usage was unusually high and the residents believed they could not have used that much water.

Based on a visit that he and Public Works Director Sam Hale paid to one of the homes and an inspection by a plumber at the other home, he believes it is possible that someone was stealing water from the homes, causing the abnormally high bills. Both bills were adjusted to match their previous six-month average.

—Approved a request for an additional streetlight on Howard Heights Road.

—Approved a virtual training seminar for the City Clerk at a cost of $200.

The next Board meeting is set for Tuesday, Nov. 3 at 5 p.m. in Poplarville’s City Hall.

The bridge on Troy Dedeaux Road is currently closed because the old bridge was scheduled to be removed Wednesday. Les... read more