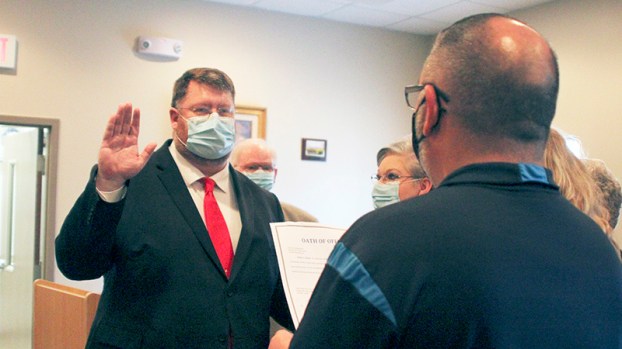 OATH OF OFFICE: Newly elected Alderman Daniel Brown is sworn into office during Tuesday’s Poplarville Board of Aldermen meeting. Photo by Cathy Cook

Brown sworn in as new Alderman

Newly elected Alderman Daniel H. Brown was sworn into office Tuesday during the Poplarville Board of Alderman’s regular meeting.

The Board accepted Brown’s resignation from the Poplarville Planning Commission as he was elected as Alderman-at-Large.

Brown will complete the term of Tony Smith who resigned in the summer after being appointed the Mississippi parole board.

Collier also updated the Board that the police department was able to submit a third month of NIBRS reports to the state on Thursday. The department is required to submit six consecutive months of reports by January in order to keep the grant funds already awarded.