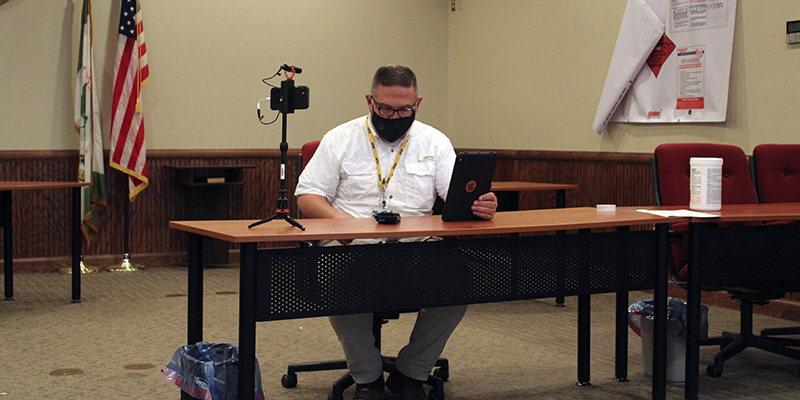 Mayor Rossie Creel attends a brief Poplarville Board of Aldermen meeting Wednesday during which the Board approved the final payment for a contract for asphalt paving that was part of the 2019 Road and Bridge Bond program.

The Poplarville Board of Aldermen approved the final payment for asphalt in the 2019 Road and Bridge Bond program.

Warren and Warren Asphalt and Paving were paid their fourth and final payment for the project, $47,718.

The project was funded by a general obligation bond of $1.3 million. There is still at least $10,000 in the bond fund.

The Board plans to allow the remaining funds to stay in the bond fund until next year when money from the Internet sales tax may be able to be combined with it to do additional paving projects, according to previous coverage. City Clerk Jane O’Neal said that once accounts are reconciled and the fiscal year is closed, an exact number will be available, but a preliminary estimate of the remaining funds is over $10,000.

During the special called meeting Wednesday, the Board also approved the final claims docket in the 2019-2020 fiscal year of $134,334.

In a separate road project, the city also has concrete work that is almost complete. The concrete work on Martin Luther King Jr. Drive, and Pine Street has been completed and is being finished on Main Street, said Mayor Rossie Creel.

The next Board meeting will be Tuesday, Oct. 6 at 5 p.m. A run-off election to fill the empty seat on the Board will be held Tuesday, Oct. 13.