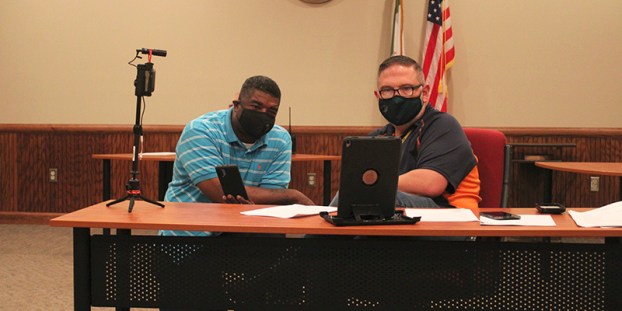 Poplarville resident Melvin Henry and Mayor Rossie Creel look at images of a drainage ditch and berm during Tuesday's Board meeting. Henry was upset by the amount of dirt left after the city completed improvements on the drainage ditch.

Frustrations were high over a drainage project on Martin Luther King Jr. Drive at the Poplarville Board of Aldermen meeting Tuesday.

The Board heard concerns from residents who live on Martin Luther King Jr. Drive. The city recently completed improvements to a drainage ditch in the public right of way that runs near the residents’ property. Previously, the ditch was at the same elevation as the home, so storm water was running off the road into the yard and creating issues for the homeowner and residents.

One of the residents, Melvin Henry told the Board he believed the berm constructed behind the drainage ditch was much larger and higher than necessary to prevent flooding. The berm varies in width from four to 10 feet, said Henry, and was constructed from dirt removed from the ditch.

Henry was particularly concerned with a large amount of dirt left in the yard. Henry said he was told the city would add sod to the dirt, and instead brought grass seeds and hay.

Jason Lamb with The Walker Associates told the Board that the berm was constructed using dirt from the site to help reduce project costs and was intended to prevent storm water run off in a significant rain event. Lamb said reducing the size of the berm might not provide protection for excess rain events.

He also said that extending the drainage ditch or adding additional drainage measures could be performed, but the ditch was built in an effort to conserve funds. Lamb said the city already spent $11,000 to $12,000 on this particular drainage issue.

Board member Kevin Tillman made a motion to remove the dirt the homeowner wanted removed, relocate the water meter and add dirt to the end of the drainage ditch, but the motion failed for lack of a second.

Board member Anne Smith made a motion to remove some of the dirt and relocate the water meter, which passed.

—Proclaimed October Domestic Violence Awareness Month at the request of the Gulf Coast Center for Non-Violence.

The Pearl River County Board of Supervisors discussed whether or not to hold the county tax sale online again next... read more