Vandalism, forgetfulness a problem at Fairgrounds 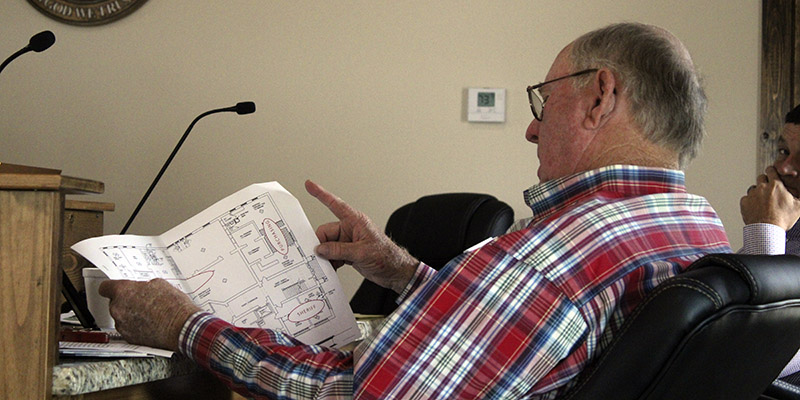 FOR REVIEW: District III Supervisor Hudson Holliday reviews plans for a county building during Wednesday’s Board of Supervisors meeting.

Managing the fairgrounds has been a headache over the years, said County Administrator Adrain Lumpkin, because people often leave the lights on after using the arena and it is difficult to hold those people accountable. In a recent incident, one of the bathroom doors was kicked in, he said. So, after researching what other counties charge for use of their fairgrounds, the county is implementing a new fee schedule and cameras are being added to the grounds.

With the new fee schedule, if the same organization books the arena more than six times in a calendar year, they will receive a discount. The Mississippi High School Rodeo will allowed to host three rodeos per year free of charge and PRCC will be able to host one free rodeo per year.

The Pearl River County 4H will be able to continue using the arena as it has been, which includes its regular meetings on Tuesdays, using the concession stand to fundraise for the Torrance Family School House free Thanksgiving dinner, and holding the county livestock show and sale annually.

In a separate matter, the Board discussed making sure the generators owned by the county are regularly maintained. District III Supervisor Hudson Holliday said he is concerned about the generators and wants to make sure they will be ready to go should a storm occur. Board President Sandy Kane Smith said he would like the schools to provide a log of what work is done on the generators on hand, and District II Supervisor Malcolm Perry suggested the county consider hiring a full time employee to conduct electrical work and regular maintenance on all of the county’s generators.

The Board decided to start with compiling a list of generators owned by the county and their locations. Emergency Management Director Danny Manley said he has a list that includes the majority of them.

In a separate matter, the Board discussed the frequent train stops across roads in the county. Holliday suggested the Board research what can be done and what restrictions are in place concerning how long trains can block a road, although he said the issue may be well outside the Board’s authority.

—Approved the Road Department widening the main traffic driveway at the entrance to Poplarville Middle School. Some cars are ending up in the grass, and the school’s administrators are concerned that after a rain event cars might get stuck.

—Approved purchasing two tractors for the Road Department. The tractors cost $62,124 each. Two of the department’s tractors need to be replaced and will be sold. The profit from that sale will go toward the cost of the new tractors.