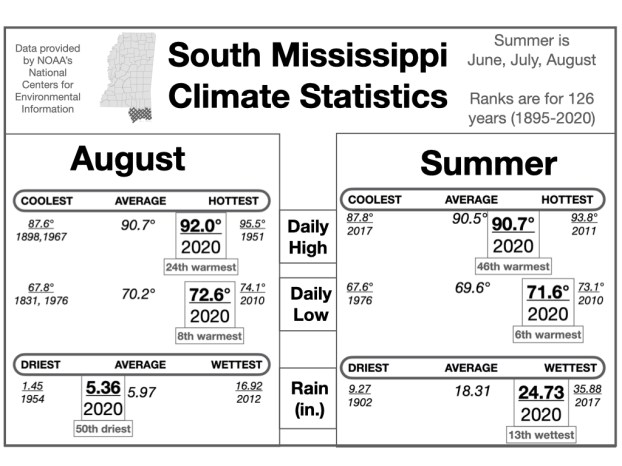 The statistics say that mid-September is the peak of the hurricane season, and this year is no exception. The National Hurricane Center (NHC) is watching six tropical systems, including two in the Gulf.
The disturbance in the central Gulf is headed toward northern Mexico. It’s the tropical wave that’s moving from Florida into the eastern Gulf that will be of more interest to us. The system is still in the formative stage, so there’s not much to say at this point. It will be a good idea this weekend to keep up on the latest from NHC at www.nhc.gov.
Instead, let’s look back at August and the summer just ended. You might justifiably ask who thinks summer has ended here in south Mississippi. However, climatologists define “meteorological summer” for record-keeping purposes as June, July, and August in the Northern Hemisphere.
This August was the third warmest on record in the Lower 48 states, and this summer was the fourth warmest. That’s according to statistics released on Wednesday by NOAA’s National Centers for Environmental Information (NCEI). NCEI has reliable weather records for the lower 48 states going back 126 years to 1895.
NCEI compiles statistics for south Mississippi by averaging data from weather stations across the six southernmost counties, which includes Pearl River County.
For south Mississippi, August 2020 ranked in the warmest one-third of Augusts on record. For the entire summer, high temperatures averaged near normal, but low temperatures were much warmer than normal averaging 71.6 degrees.
South Mississippi had a wetter-than-average summer, while August’s rainfall averaged about normal across the six counties. However, the western half of Pearl River County was generally drier than average and the eastern half wetter than average last month.
September is off to a dry start in our county with most locations receiving less than one-quarter inch of rain over the last week. That’s about to change.
Even if the system in the Gulf doesn’t develop, an abundance of tropical moisture will make afternoon showers likely this weekend and most of the upcoming week.

By Fr. Jonathan Filkins So many centuries ago, it was written in the Book of Proverbs, “A glad heart makes... read more