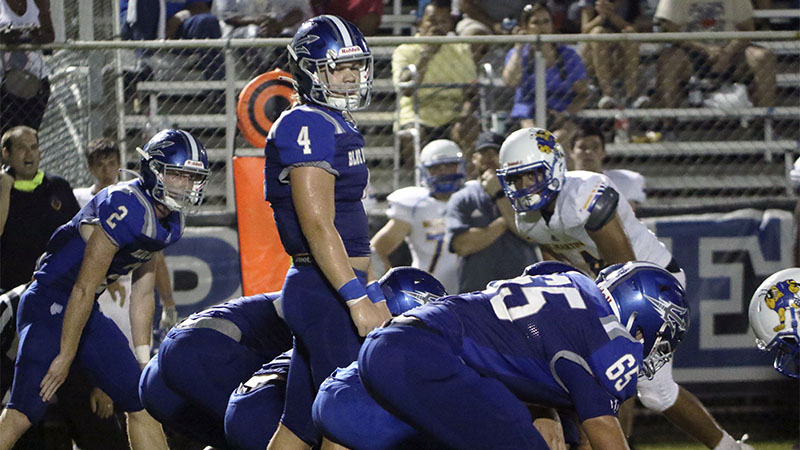 New Play: Quarterback Dalton Lee looks to the sideline for instruction as PRC looks to dial up the correct play. Photo by Jeremy Pittari.

The Pearl River Central Blue Devils are coming off an inspired win against St. Martin last week, ending in a score of 19-17, but now have to prepare for an 0-2 Gulfport Admirals team.

“I thought we performed with a great deal of resiliency and we stuck together through some very difficult circumstances,” PRC Head Coach Jacob Owen said.

It was a close game for the Blue Devils and Owen said there’s still plenty of room for improvement offensively.

Defensively, PRC was stout for the second game in the row.

Ty Herring, who is usually one of the team’s leading rushers from his running back position, accounted for the most tackles on the team against St. Martin alongside Branson Logan.

Owen said no matter the opponent, which this week will be a very athletic Gulfport team, the Blue Devils’ defense is a better unit with Herring in it.

“Ty is a heck of a linebacker and a heck of a football player. Ty is going to do whatever the team needs him to do and that’s why he’s a team captain. He plays the game the way it should be played and there’s a definite benefit with him being over there,” Owen said.

PRC has been great so far this season at forcing turnovers and putting opposing quarterbacks under pressure.

Gulfport’s quarterback Breck Leflore was a dangerous weapon against Picayune last week, so the Blue Devils will hope to force Leflore into making some mistakes by applying pressure from the defensive line.

“Our defense is predicated off of pressure. A lot of times, if you can create pressure, it leads to more tackles for a loss and more turnovers,” Owen said.

Because of inclement weather, PRC is not going to get the amount of practice time the team normally logs during the week.

However, Coach Owen has faith in his squad and is looking to extend the season opening win streak to three games this Friday.

“We feel like they’re probably the best opponent we’ve played to date, but we feel like we’re pretty good too. We’re expecting to go over there and win the football game. As long as we get to play we don’t care. It’s such a blessing we get to play every Friday,” Owen said.

The game against Gulfport will be an away contest for PRC and kick off is set for 7 p.m.