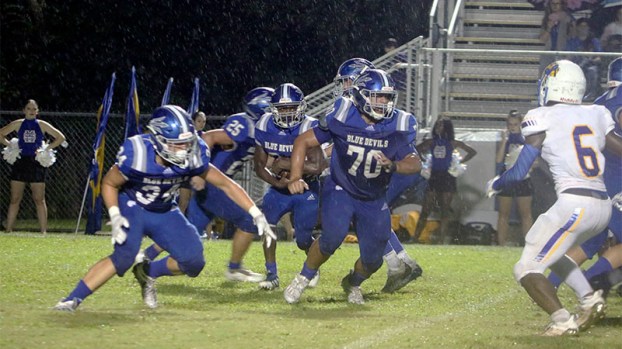 Out Wide: Running back Destin Coleman takes a hand off and follows his two lead blockers, full back Eli Lavigne and lineman John Linden, during a recent game. Photo by Jeremy Pittari.

Forrest County was originally scheduled to take on the Blue Devils last week, but because of a COVID-19 outbreak the Aggies had to cancel the game.

However, Gulfport had an available spot so the Blue Devils traveled down to take on the Admirals in what was PRC’s final non-district game of the season.

The score was close for the majority of the game.

Quarterback Cam Brunson hit running back Destin Coleman for a long touchdown pass in the second quarter, which was followed up by a short touchdown run from Peyton Thigpen in the third quarter. The score was 21-14 in favor of the Admirals heading into the fourth, but 21 unanswered points in that quarter by Gulfport led to the team earning its first win of the season.

“I thought we battled really hard for 42 minutes. The last 6 minutes of the game it seemed like we kind of threw in the towel. We didn’t respond really well to some adversity we had. Developing a 48-minute mentality is going to be something we harp on this week,” Head Coach Jacob Owen said. Owen said there is still plenty of improvement to be made on both sides of the ball, and offensively the team needs to execute better.

PRC’s style of offense requires all of the players to be on the same page and for each piece of the offense to move in tandem with the others.

However, when a block is missed or an assignment botched, that’s when the team’s ability to score suffers.

“We’ll come out one drive and block the right people with great effort and score a touchdown, and then come out the next drive and decide to change the way we block things or not block with great effort,” Owen said. Senior linebacker Branson Logan led the team with 18 total tackles and has been consistent contributor on the defensive side of the ball for the Blue Devils this season.

Owen said Logan’s understanding of the game, trust in his coaches and confidence in his teammates is what allows the senior to be such a dynamic player for PRC.

Following the loss the PRC’s players will now turn their attention to this week’s opponent, the Pascagoula Panthers.