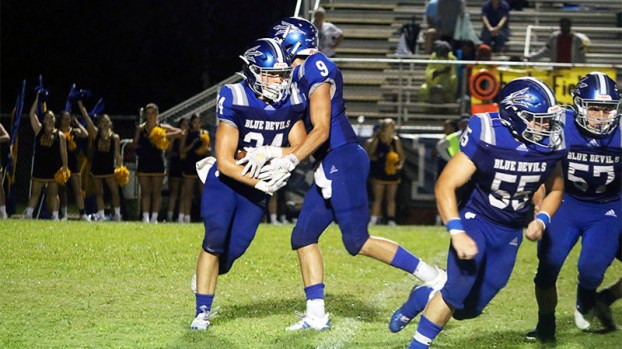 Secure The Ball: Wing back Eli Lavigne takes a hand off and starts heading up field as guard Carson Cunningham pulls around the edge to block. Photo by Jeremy Pittari.

PRC hopes to start off district play with a win

The Pearl River Central Blue Devils are coming off a 42-14 loss to the Gulfport Admirals last week and now have another tough opponent this Friday when the Pascagoula Panthers come to town.

The matchup between PRC and Pascagoula will be the first district game of the year for both teams.

The stakes have been raised with every game from here on out affecting the teams’ playoff positioning.

The unusual circumstances regarding this season of football continue with programs not having the normal amount of preparation time or games before the start of district play.

COVID-19 shortened the season, meaning there were fewer weeks for teams to implement their game plans and build team chemistry before the games started having an affect on the possibility of a postseason.

PRC’s Head Coach Jacob Owen said there were several ways the team needed to improve upon last week’s performance in all three phases.

The margin for error is as slim as it’ll ever be with teams now starting to compete for district supremacy.

“We didn’t play very well on special teams last week, that’s something we have to focus on this week. We didn’t tackle very well and didn’t line up (correctly) defensively, so that’s another area we’re going to focus on. Offensively it’s going to be about consistency and giving the same effort every play,” Owen said.

PRC won the matchup against Pascagoula last year 20-13. Owen said that result may inspire the Panthers to come out the gates quickly Friday night.

Minimizing mistakes will be key for the Blue Devils as PRC looks to start district play with a statement.

“They’re a team that we beat last year, and we started out last year 1-0 in district. They’ll come in here fired up and ready to play. We feel like we have a good plan against them, we just have to go out there and execute Friday night,” Owen said.

PRC will have six games after the Pascagoula matchup to earn a playoff spot.

Winning against the Panthers Friday night would be a good first step in achieving that goal, but a loss won’t be insurmountable.

“The expectation is to be 1-0 in district, but at the end of the day it’s a long season. This one doesn’t make or break us, but we certainly would like to have it,” Owen said.

The game will be at home with kickoff set for 7 p.m.

PRC swimming overcomes nerves in first meet of the season

The Pearl River Central swim team had its first meet of the year last Thursday and the athletes fought through... read more