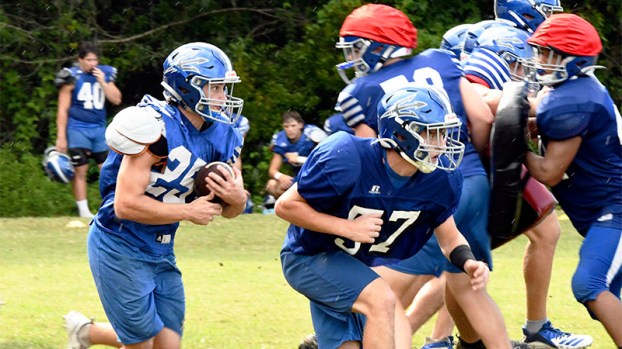 Experienced Back: Senior running back Ty Herring follows his lead blocker during a Blue Devil practice. Herring ended the game against Sumrall with 76 yards on 17 carries and a touchdown. Photo by Jonathan Mitchell.

The Pearl River Central Blue Devils football team won its first game of the season against the Sumrall Bobcats in a tight game 14-6.

The two week delay due to the ongoing pandemic didn’t seem to faze the Blue Devils as they traveled to Sumrall and came home with the victory.

Head Coach Jacob Owen said the performance wasn’t perfect, but he was happy his team got the job done.

“We didn’t play well, but we won. Normally when we don’t play well we don’t win, so hopefully we’ll continue to improve as a team and we’re glad to be 1-0,” Owen said.

PRC employed a trio of running backs who had the majority of the carries against Sumrall.

Senior running back Ty Herring had 76 yards on 17 carries and a touchdown as he continued showing his importance to the Blue Devils with another gritty display on the ground.

Destin Coleman, a sophomore running back for the Blue Devils, led the team in yards as he compiled 107 yards on just 11 carries with a touchdown.

The final member of the three headed monster in the backfield for PRC was Eli Lavigne, with the junior running back finishing the game against Sumrall with 42 yards rushing on 10 carries. PRC also had a solid showing defensively as they shut down the Bobcats’ offense.

Senior Brady Johnson led the team with 8 tackles, and Owen said his presence is vital to the team defensively.

“Brady is our baddest devil. He’s a captain and a leader on that side of the ball. He is a guy that plays with an extreme passion for the game. A lot of times, we go defensively as he goes, and with the other seniors,” Owen said.

The Blue Devils were also able to get pressure on the quarterback.

Turnovers also played a key role in the Blue Devils’ win. Johnson had an interception, while senior defensive back Moose Rutledge and junior inside linebacker Cade Kennedy both had fumble recoveries.

Sophomore kicker Tyler Diebold also impacted the game on special teams as he went 2 for 2 on PATs, averaged 33 yards a punt and averaged 32 yards on kickoffs.

“I thought special teams was probably the highlight of Friday night. That’s a phase of the game we take a great deal of pride in, and we made several plays on special teams,” Owen said.

The Pearl River Soccer Club had meetings Aug. 29 and Sept. 2 to determine if a fall season would be... read more